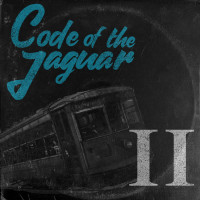 Code of the Jaguar

Code of the Jaguar is the new punk band fronted by Joel Tannenbaum of Plow United and Ex-Friends and the playfully titled Code of the Jaguar II is their debut release. At a punchy three tracks and nine minutes, the EP’s format itself seems to be a statement.

Although his various bands have trekked through various punk subgenres (scrappy pop-punk here, heart-on-the-sleeve roots punk there, singer songwriter reflection yonder), Tannenbaum has made it a point to bend his style around the conventional 180 second snapper, and to his credit, it pays off for him that he’s more interested in challenging himself by pulling the profound from this format.

Tannenbaum likes telling stories as much as he does crafting songs, so here, he has a little fun with Lou Reed style vignettes. “Something Shady” finds the band strolling through a dusty track as Tannenbaum understates “gimme something shady” before cooing out a la-la-la-la, that either intentionally or unintentionally, references Reed having fun in the seedier side of things with his own iconic “doot-da-doot-da-doot-doot-doot.”

While all three tracks here are rooted a sense of restrained melody, between the coasting chords, the band sticks some downright jagged strikes, which in addition to juicing up the tunes, slip a sort of hidden menace behind the dreamy lyrics and rhythm section. “The Spy Who didn’t Drive” quite amusingly really pulls off this trick nicely as the band tells the story of a spy getting up to covert actions at borders and in the dark, all the while the band coos here, but also screeches in the back while sealing the package with surrealistic dream imagery.

As he’s proven before, Tannenbaum is a poet and melody maker first, and a punk rocker second (and maybe he doesn’t even think of his music in the “punk or not punk” context anymore, anyways.) This release shows that he’s continued to develop his skill of warping axioms to mean something they didn’t mean before and probably more central to his focus, telling stories without telling too much of a story. It also happens to be nice that the music here is multi-layered and warm. As a debut release, II lays out the band’s objectives and they achieve them. Still, when the band veers away from those objectives and gets dangerous here and there… well, that’s where the band may very well find that it can stand tall along side its progenitors.

Tiny Moving Parts: For the Sake of Brevity [7-inch]