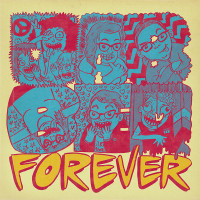 Jabber’s been around for a while. They released their first demo/Ep Too Many Babes in 2013. It still rips and begs to be revisited even as the band releases their newest Ep, Forever, half a decade later.

If you like your pop-punk bearded, mopey, and self serious, then Jabber probably isn’t for you, since the northern California quartet bring the fun over and over again. Whether it’s doing cover sets of No Doubt and the Spice Girls at The Fest or writing an entire song based on a quote from Mean Girls, Forever bounces with the irreverent silly energy of bands like The Pillowfights, Mixtapes, or anything that Mikey Erg has been involved with.

Forever is a compact Ep, packing 5 songs into 10 minutes or a single side of the physical record (if that’s your thing). It finishes with its strongest track, “Caesar”, and the main knock against it would be that as Jabber has gotten tighter musically as a band, they’ve lost some of the shagginess that made their first few records so fun. Anyone just finding the band should definitely spend some time with their back catalog.