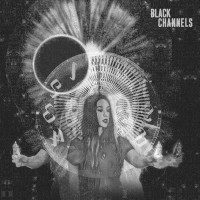 Of all of the genre-revivals and creations of the past few years, the emergence of the horror pseudo-soundtrack, as it were, has been one of the most interesting to witness. With labels like Mondo, Death Waltz, and Waxwork at the forefront, and bands like Zombie and Goblin enjoying newfound appreciation, several artists have decided to take on the aesthetic, the horror-trappings, and the electronic psychedelia of the '70s-'80s and eschew making a scary movie in favor going right for the atmospheric score. One such group to tackle this strange mish-mosh of atmospherics, electronics, and good-old-fashioned genre-film-love is Black Channels.

2015 saw the release of their first 10-inch single through Mondo and, while inaccessible, the three songs presented within open up a world of haunting ethereality. The lead track, Oracles, is gripping. Over the course of 4 minutes, the music of Simon James, the drums of Colin Lamont, and the whispy vocals of Becky Randall combine to create a sum much greater than its parts. The next track, Depth of Field, slows things down and very nearly overdoes it with its attempts to sonically touch on a multitude of creepy tropes. Finally, the record ends with a quick little track, Whispering Sons, that, by nature of its masterful composition and slow, creeping tone, would not be out of place in a Lucio Fulci film.

Initially, Black Channels seems to be more about the style than the substance. However, for anyone who has ever taken that great cultural middle tangent between punk and metal-- horror-- this record will remind you of the haunting sound of some of the greatest late-night fare. Turn the lights down low... No, lower... You know what, just turn them out, throw on The Beyond, and see if it syncs up with Black Channels, I would be delighted yet unsurprised if it did.