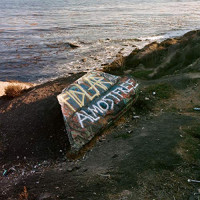 If you're looking for the good ole' garage punk/grungy Fidlar, fair warning -- you've come to the wrong record. Almost Free takes quite a few steps away from the records prior and basically gives us a Cali-sound made for getting high on the beach and wasted at music festivals. Forget the head-banging and moshing, this album's for those who want to piss the night away in a hammock or chair, and wake up the next morning wondering what happened; so in short... it's classic Fidlar. However, while the musical style's sure to leave fans scratching their heads, peer a bit deeper and you'll see their signature's very much there -- it's just, well, diluted and funkier than ever.

There are a lot of directions this album's split over. And make no mistake, Zac Carper's stoner-style perfectly accentuates all of them. It's amazing to see him complement so many divergent soundscapes and ultimately, you can't say they aren't a versatile band. You've got shades of Cage The Elephant, Say Anything and even bands like Blur and The 1975 on songs like "Scam Likely". Do they work out all the time? Not really, as with the latter and "Flake" which rolls out like an uninspired and cheap Black Keys cover. But soaking in this album more and more as weeks went by, it's clear Fidlar got tired of the sound they crafted and wanted to shoot the shit with bands that influenced them, like it or not.

The ones that register do so with a lot of impact. "Get Off My Rock" has Carper doing his best Beastie Boys impression against a Beck backdrop, while the song that kicks ass the most is undoubtedly "Called You Twice" with K. Flay. I caught her at Riot Fest and she was one of last year's most pleasant surprises and here, you get a perfect ending to a Netflix rom-com. It's like Plain White Tees "Hey There, Delilah" meets that song about the person walking 500 miles for someone they love... you know, that one. Kicks aside, it's catchy and such an ear-worm, and as one of my friends summed it up -- it feels like a closer on a Taking Back Sunday album. (Do with that as you please)...

Overall, what I can tell is that after seeing them in LA at a fest, their fans would love this record. It fits their M.O. of being unconventional, hip, cool, rebelling and not giving a fuck -- even with their base. Most of all, the stoner vibe is still there although it's less garage and not heavy at all. I can't envision pits and circles, but I can tell from doing quite a bit of festivals, such a diverse move by Fidlar will draw even bigger crowds and boy, do they draw a fucking crowd. Rowdy and passionate in the least. I think there'll be older folks coming into the fanbase now as this record sounds like a profane alternative rock album from 1995-99. The lyrical content -- sex, drugs and depression -- may be a lot to take in and when it's a narrative spun on crappy songs and drunken rambles like "Kick", set to psychedelic guitar haze, it may be tough to take in, but as the album draws down, you'll find there are more tracks that can best be described as beer-guzzling fun on tap.

For fans of old, hey, at least you've the loud, buzzy "Nuke" for 39 seconds to enjoy and the Wavves-esque aura of "Good Times" that fit high-school sex-fuelled escapades in movies like Trojan War -- which brings us back to those who see Fidlar as an ugly substitute for SWMRS and Arctic Monkeys. Musically, technically ... yeah, but now their character and personality have broken free of this mold and it's best summed up on "Can't You See". Eclectic, soulful guitars with some Ty Segall-flair thrown in here and there to remind us that Fidlar may well be the Sublime of our generation -- subverting, imitating and mixing it all up so well. There aren't as many winners on this record as I wanted, but hey, if it's one band I'll trust to get it right on the next attempt are these high-as-a-kite motherfuckers.