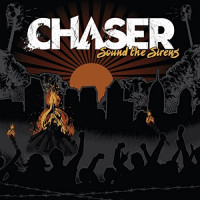 With Sound the Sirens, Chaser has produced a solid album that highlights a love of ‘90s era skatepunk amidst the burgeoning explosion of radio friendly pop-punk a few decades back. A combination of speed, aggression, and melody provide for a throwback listen that still sounds fresh, passionate, and aggressive.

The first thing that caught my attention on this album were the intros, which are carefully calculated, for each track. Sometimes, you know what you’re going to get immediately. As in songs like “The Uprising” and “Silencer”, both of which open with a speedy chord progression that adds a sense of urgency and anticipation. “At What Cost?” is another great example of this, but the urgent nature is accomplished with a rolling snare and an octave-laden rhythm. Other times, the intro completely throws you off, in a good way. “Bonfire” opens with an acoustic guitar and a gang-vocal chorus, but eventually leads to speedy verse. And “Wars” starts off with a crunchy, muted guitar, which I thought would lead to a chorus with the full band, but it never does. But after a few listens, this decision makes perfect sense.

Whether they are intentional or not, the influences on this album are clear. The most notable case comes in the “The Show”, probably the catchiest song on the album, which pays homage to hangin’ out at shows and contains various punk rock references. “A Million Reasons”, starts off fast and continues with a Fletcher-esque guitar and utilizes those musical jumps that were popular in the mid to late ‘90s. And in “Woe Song”, the melody sounds like it could have been written by Fat Mike. Even the ending mirrors a NOFX song. And all of this is enhanced with octave rhythms, sweet little melodic riffs, and varying tempos (often times within each song).

With a ton of singalong moments, sharp lyrics, and solid musicianship, this is an all-around coherent record of 11 great songs. I don’t know a whole lot about Chaser’s back catalogue, but this record will definitely cause me to dig a little deeper.