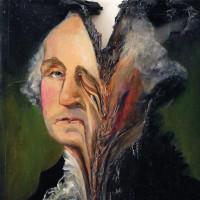 Kevin Devine and the Goddamn Band

From the melting facade of George Washington dripping down the album cover, to the very last note of the album, the most striking aspects of Kevin Devine and the Goddamn Band's 2013 album, Bubblegum, are its energy, its grab bag of songwriting styles, and its outspoken politics.

Devineâ€™s goal on Bubblegum is to shout his brand of sense to anyone within earshot, and he does so in a way that is eloquent, focused, and informed, yet not so heavy-handed that the message verges on cartoony or impotent. â€œNobel Prizeâ€ serves as the albumâ€™s mission statement, taking issue with a country overstepping its boundaries in global affairs, as well as its role in the systematic degradation of the planet, followed by â€œPrivate First Classâ€, a defense of Bradley Manning and the role of the modern whistleblower. â€œFiscal Cliffâ€ finds Devine positing that perhaps the theater of news and politics serves as â€œdistraction from the main eventâ€, and questions the role all American citizens play in the circus. All the while, the songs stride the gap between punk rock and pop, lifted by explosive, sing-along choruses, particularly those of â€œNobel Prizeâ€ and the eponymous â€œBubblegumâ€.

One other striking element of this album is the variety of styles showcased within the songs themselves. Album highlight â€œBloodhoundâ€ forgoes politics for a fuzzy, Weezer-esque two-and-a-half minutes of poppy goodness, while songs â€œI Canâ€™t Believe Youâ€ and â€œRedbirdâ€ have much to thank producer Jesse Lacey of Brand New for, as his touch is evident within the slower, more melancholy tracks of the record. Lacey also plays multiple instruments throughout the album, so fans of Brand New should find their interests piqued by what awaits their ears on Bubblegum. At other times, sonic touches along the lines of Ted Leo, Tom Petty, and maybe even some early Foo Fighters creep into the mix as well.

Bubblegum is an eclectic album that finds itself snatching influence from a dozen different sources and distilling them into a focused, intelligent album that feels vital when held up to the current state of rockâ€™s role in politics. This is poppy rock nâ€™ roll with a point of view.