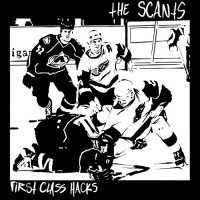 I’ve made no attempt to hide my love of classic punk and hardcore. I’m especially happy when I find some (relatively) young guys like The Scants playing this style. The Grand Rapids, MI based trio has been on my radar for a couple of years now, and they’ve been teasing a full length for months. They finally unceremoniously dropped First Class Hacks on January 1st. In the middle of First Class Hacks is “Right Brigade”, a cover of the Bad Brains classic from their 1982 self titled debut. The guitar tone on the original seems to be their guide. While no band can match the intensity of those early Bad Brains songs, The Scants attempt to capture their spirit.

First Class Hacks is nine songs in about 18 minutes, and is a mere one song longer than their self titled debut EP from 2017. (Their other release is a split with local ska band Dance Contraption.) What they lack in quantity, they make up for in quality. Five of the songs are re recorded and sonically upgraded versions of tracks from the EP. “Struggle”, “S.C.S.”, “Right Brigade”, “Dave” and “First World” all benefit from their slight reworking. New songs “Get Better”, “Insomnia”, “Don’t Care” and “All In Vain” bristle with a sense of urgency. To me, “Struggle”, “First World” and “All in Vain” are the standouts.

The Scants aren’t afraid get political or personal, and the songs on First Class Hacks are split between the two topics. The songs are either inspired by the sloppy state of the world, or the sloppy state of the writers’ individual lives. While the band plays classic punk and hardcore, they manage to avoid most of the lyrical clichés associated with the genre. The exception might be the hockey themed cover art. I know that used to be a big thing in hardcore circles, but I haven’t seen much of it lately. If you like your punk the same way you like your hockey, old school, check out The Scants and First Class Hacks.