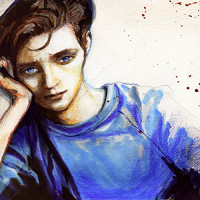 I'll admit that as much as I adore Say Anything's older material, I was a sucker for Hebrews. As a Max Bemis solo act there was something there that felt fresh, unique and him just wanting to move away and take a risk. I could respect that and even the EP that followed. However, what I always wanted to hear from Max was a bridge between eras and honestly, given how well he's doing in the comic industry, I assumed he'd divert this energy there and I wouldn't hear it on a record. Well, Oliver Appropriate has quickly proved me damn wrong.

The lyrical content on this album is fucking astounding as it handles Max's sexual identity and how being a bisexual impacted on him and his family life. There's a dichotomy here that you'll find in his books like Moon Knight and Polarity which truly paints the last five years of anything he's done as the most well-written, no matter the medium. The acoustic drawl laid over self deprecation on "Daze" is a great example of this, coming off a la Hebrews but it's oddly anthemic and infectious to the point you can't stop foot-tapping. I'd say it's a staple of Max's work but this time the sonic signature is a bit more impactful as it trawls over real-world and personally relatable issues.

The character on this record stands out a lot in the way Conor Oberst's materials do. It's catchy, folky and shout along -- just see "Pink Snot" or the Jimmy Eat World tribute in "Send You Off". It's pop punk, emo and indie all balled up into one fist, held high to sky and affirming that Max is no longer a real boy, but a real man. By the time "It's a Process" comes around as homage to the '80s era of synth and piano keys, you can't help but appreciate the lush arrangement and poppy quality of Will Yip's sound production. It certainly moves away from the droned out shoegaze/grunge he's been binge-producing over the last couple years and tightly freshens up Max's sound to a mainstream yet indie feel.

Ultimately, this is a teenager's diary, struggling with the angst of how divided he feels inside. Max bringing it out serves as a reminder that we'll never escape these woes and it's something I hope he gets to scribe for Marvel on books like Champions someday. You can tell fatherhood has made him a better creative and hopefully he truly doesn't paint this as Say Anything's finale. I'd have loved this more as an EP as the filler tracks don't resonate at all but still, for what it's worth, this record doesn't say just anything... for fans of Max and the band over the years, it says everything.