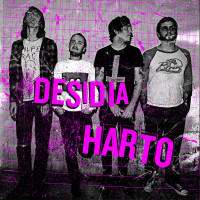 Some bands come into being and outstay their welcome for years on end. Others have a lifespan equivalent to that of a bee, four to five weeks on average, and for whatever reason then cease to be. Iâ€™m not exactly sure how long Desidia existed but it wasnâ€™t long enough. Fortunately this L.A. based quartet managed to find the time to lay down seven tracks of punk rock which builds on, and also adds to, that cityâ€™s punk rock history.

Desidia is the vehicle which provided an outlet for individual and collective disillusionment, rage and the primal urge to just scream real loud, rather than keeping a lid on the pressure cooker like existence produced by being part of the daily grind. This is heard on the opening track â€œAlli Estasâ€ in which Rene Navarro lets rip with â€˜Wake up and convince yourself today will be a different day. Go to bed and realize aint nothing fucking changed.â€™. This is no call to arms to lift yourself up by the bootstraps and make a new life for yourself, more a case of acknowledging the acceptance that life is fucked up and you might as well get used to it.

This is the general tone across the seven tracks, which hits hard and generates a palpable sense of bleakness and inevitability about now and the future. Within the musical whirlwind that underpins Navarroâ€™s lyrics is the unmistakeable guitar sound of Daryl Gussin, also the six string maestro in the duo Spokenest. He launches attack after attack on those strings, delivering a trebly, razor edged sound. I really do like his style as it always come across as sharp and spiky, combined with a sense that he uses the instrument as a cathartic outlet in the same way Navarro uses his voice. Iâ€™m not one to dish out faint praise but these guys frequently remind of early Circle Jerks across the majority of these songs

Desidia offers up the kind of anger which brought me into the world of punk rock almost forty years ago. There is still a need for it today and I thank the four individuals within the band for producing something which makes me happy despite the lyrical content being as far from that emotion as it possibly could be. The world needs more bands like this, be they short term efforts or ones which give us a good few years of their creativity.

The Swifts: All Sunshine