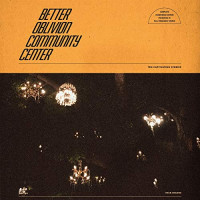 The combination of Conor Oberst and Phoebe Bridgers makes perfect sense. They’re both singer-songwriters whose material is flooded with emotional, crafty wordplay. They were both thrust into the limelight at a relatively young age. Their collaboration “Would You Rather” from Bridgers’ debut sounded beautiful and natural. So when rumor had it something called Better Oblivion Community Center had Oberst and Bridgers involved, there was reason to be excited. Once the initial mystery cleared, the band surprise released a full album coinciding with their performance on Colbert. Since then, they’ve seemingly been everywhere promoting this thing.

Better Oblivion Community Center, minus the cult sounding name, is exactly what you’d want and expect from the two. When Bridgers takes the lead, it sounds like her own and when Oberst sings, it sounds like any of his later career eponymous albums, with significantly less harmonica. Opener “Didn’t Know What I Was in For” finds Bridgers taking a couple gorgeous verses before Oberst joins her for the hook and the chilling harmony begins. “Dylan Thomas” benefits from the same vocal collaboration. Their voices are complementary, both full of emotional wreckage. So while it’s great to hear either on record, every moment they spend sharing the microphone notes an uptick in quality. It’s worth mentioning they both have recently benefitted from major collaborative projects. Bridgers’ supergroup boygenius released a near-perfect EP last year, while Oberst reunited with Desaparecidos a few years back. Since then he’s been on a pretty hot streak.

But more than anything BOCC reiterates how good a songwriter Oberst is and how the fourteen-years-younger Bridgers is able to stand toe-to-toe with him. Here are some gems:

“They say you’ve gotta fake it, at least until you make it, that ghost is just a kid in a sheet.” (“Dylan Thomas”)

“I know a girl who owns a boutique in the city, selling clothes to the fashionably late, says she cries at the news but doesn't really.” (“Didn’t Know What I Was in For”)

“You used to sing with a straight face ‘My Heart Will Go On.’” (“Forest Lawn”)

Better Oblivion Community Center acts like something cultish, but it’s really an excellent collection of songs by two great lyricists. Neither really plays too far out of their comfort zone (even if “Exception to the Rule” brings back some Digital Ash nuances) but both lend themselves to the other. The result is an excellent addition to each artist's catalogue.