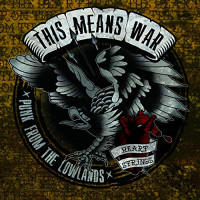 I sometimes wonder if it's a ancient DNA thing. My love of punk bands from the Netherlands that is. While I am a European mutt of various unknown origins, I do know I've got a good chunk of Dutch I've long been into NRA, Funeral Oration, Citizens Patrol, Vitamin X and a handful of others. This Means War! is the newest addition to that list. Like me, TMW! is actually only half Dutch, with the other half coming from Belgium. They more succinctly describe themselves as ‘punk from the lowlands’.

This Means War! came out of the gate strong with their self titled debut EP in 2017. (On the often beloved but occasionally maligned 10” format.) Heartstrings just builds on that momentum. As a matter of fact, I'm going to boldly proclaim that This Means War! have released the first great punk album of 2019. (Yes, I know it’s early.) I would describe their sound as a combination of Cock Sparrer and 7 Seconds. I know that sounds like a wide musical disparity, but I think it's accurate. There are elements of classic punk and oi, mixed with extremely melodic hardcore. The end product is undeniable.

Every song has a catchy chorus, and there is definitely an underlying spirit of political resistance. I would call the overall vibe positive while still being realistic. The driving “Why We Fight” starts things off. The high vocal range of the singer reminds me a ton of Kevin Seconds, as does the message of unity. The songs tend to be about either the struggle to survive, or the struggle against the corrupt system. All their songs are well crafted, but the ones that seem to get stuck in my head most often are “Hang ‘em High”, “Off With Their Heads”, “What Are Friends For” and closer “Forever”.

The title of the record might hint at an emo streak, but don’t let that scare you off. (For you youngsters, to tug at the heartstrings means to attempt to emotionally manipulate someone.) This Means War! does appeal to the emotions as well as reason, but not in a wimpy way. In more of a universal experience way. I’m not sure that there’s anything entirely new on Heartstrings, but that doesn’t really matter. The pieces and influences are put together and rearranged nearly perfectly. Heartstrings is a great punk record, and you should listen to it.