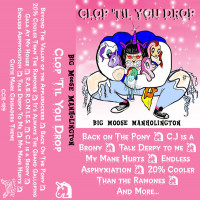 When I initially came across this cassette, I assumed that it was a Ramones fan taking a, perhaps somewhat stale, shot at Brony culture. I was wrong. After winding through this album, it’s clear that Big Moose Manholington isn’t a Ramonescore maniac that knows a little bit about My Little Ponies… he’s someone deeply entrenched in Brony culture that just happens to have a working knowledge of the Ramones.

And perhaps equally as surprising, even though Clop til you Drop is twisted from a Ramones reference and deep Ramones-lore is dropped throughout the album, it’s by no means strictly a Ramones core album. Sure, “20% cooler than the Ramones” is vaguely based on the 1-2-3-4 attack, albeit with a Jerry Lee Lewis piano dropped behind the charge. “R.A.B.R.O.N.I.E.S.” is basically the Ramones formula- as generated from a Casio keyboard. But “Cj is a Brony” is a truly heartfealt acoustic number. Meanwhile, “Back on the Pony” sounds like Mean Jeans sending up 80s synth-culture.

Meanwhile, the album is astoundingly poorly recorded. In the age of Apple laptop, it’s hard to make a recording that isn’t at least decent sounding. Yet here, Big Moose flies in and out of muddy recordings. Vocal lines are wildly off beat. Some of the backing tracks are most likely just public domain instrumentals poorly ripped from youtube. You have to work to make something sound this bad, to the point that it seems to be an act of artistic contrarianism, than a lack of skill. Yet, is that a deficit? When Daniel Johnston started releasing horrible sounding tapes, the art-elite declared that Johnston’s art was the message of a truly gifted, truly different person, unaffected by the concessions and demands of the music industry. I’m not saying that Big Moose wanders into the deep waters of Johnston, but the same type of outsider communication is heard throughout this tape.

The first half of the album starts out as semi-funny Ramones warping, lyrically. “Back on the Pony” finds Big Moose adopting the low toned horror of Joey. Yet, about halfway through, things get… disturbing.

If you’ve seen the John De Lancie hosted Brony documentary, and the corresponding Howard Stern interviews, you know that there are “good bronies” and “bad bronies.” Good Bronies are full grown men who enjoy My Little Ponies for its entertainment purposes. Bad Bronies are grown men who use the show for whacking off.

Just about halfway through this tape, Big Moose goes from randomly mixing Ramones references with My Little Ponies to being explicit about wanting to fuck cartoon horses. Really, really explicit. “Endless Asphyxiation” says all you need to know, but the follow up track, “Talk Derby to Me,” continues the theme of autoerotic asphyxiation. As for “My Mane Hurts…” uhhh…

This is not a good album. The abysmal sound quality alone cements that. Add onto the fact that it’s a grotesque joke run into the ground so many times that it goes from funny to gross to funny again to perverse. But, this is a provocative album. If the human behind Big Moose really is as disturbed as his Brony-Ramonescore persona suggests, that raises the question- if art is truly disturbing and threatening, does that mean its valid and striking a chord, or that its fanning the flames of perversion and making unhealthy things seem normal for like minded individuals? By contrast, if it’s really just some knucklehead kid on the other side, does the fact that he created such a unpleasant reaction in the listener mean he’s excelling in his art-damaged mission? Whatever this is, it’s not forgettable, that’s for sure.

The Smarthearts: On The Line