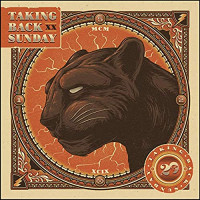 Taking Back Sunday are a band I've listened to since high school, and with the release of their collection Twenty, as a 30 year dude now, I can safely say it's been a joy being hooked on them -- two decades under the influence.

Now, they're one of the few bands I'd leave the Caribbean to see anytime (along with Thursday), but lucky enough I've caught them in festivals in LA and Riot Fest (who are addicted to them too, it seems) which have probably given me my fill. Yet no matter how much I say I'll catch another stage, their infectious, catchy, angsty, emo songs of heartbreak keep reeling me back in. And this album definitely cranks out most of their hits, although it's a tall order as their first four records are perfect front to back.

Everything they do, closers to ballads, register so well and honestly, if you know anyone who hasn't listened to TBS, let them sink into this and the rest will be history. Forget the Brand New feud, how frontman Adam Lazarra's voice is shot and that's why he's into more classic rock and roll joints these days, and their multiple lineups shifts because records like Tell All Your Friends, Where You Want To Be and Louder Now are era-defining.

I'll just cut to songs like "Sink Into Me", "Tidal Wave", "Everything Must Go", "Flicker, Fade" and "You Can't Look Back" which I'm glad they too recognise as the best of the bunch when it comes to the new and somewhat average music they're churning out now. All in all, with songs like "Cute Without the E", "A Decade Under The Influence", "Set Phasers To Stun" and "Makedamnsure" -- there's more than enough goodness to go around, and also, a lot of jams/bangers/shoutalongs to leave me pissed my schedule won't allow me to come see them play these records in full on their anniversary tour. I do wish songs like "Bonus Mosh Pt. II" made the cut too but it's clear they went with what they play at shows now.

There are even two new songs for good measure -- "A Song for Dan" -- which is the band's tribute to an old friend who passed away and riffs off pianos a la Straylight Run or Bright Eyes; no surprise given John Nolan's back in the mix. Then there's "All Ready To Go" which feels like they're back to their early days, and hopefully is a signal of what's to come: intent to make the music of old because hey, they clearly still fucking can.