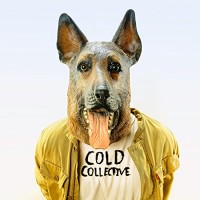 I always regret hearing about a musical project by way of an individual passing away. Despite the tragedy surrounding the recently departed Tim Landers, Cold Collective will serve as a testament to Tim’s excellent song writing and musical ability.

Bachelorette Party was released via Rise records back in 2016, and appears to have flown under the radar in comparison to some of the labels bigger releases. Cold Collective melds together aspects of Tim’s previous pop-punk projects, with 90’s alternative rock, and a heavy dose of emo sensibilities. The riffs are thick and heavy and accented by distorted and melancholic vocal harmonies.

The vocal hooks are infectious throughout the record, the lyrics are memorable and ear catching, and have a staying ability long after the songs are finished playing. The songs themselves are mid-tempo with a heavy 90’s grunge influence that could be compared to Superheaven. The stand out aspect of Cold Collective is the haunting manner of the vocals. They are well placed and atmospheric, with an ongoing nod to emo acts like Taking Back Sunday and Tim’s previous band Transit. The best part of Cold Collective is that the songs succeed at sounding vintage. The unsuspecting listener might assume these songs were actually a product of the early or mid 90’s.

While it is unfortunate that this band came to my attention through tragic news, Bachelorette Party deserves to be heard. I hope that Cold Collective can live on as a tribute of sorts for a talented and hardworking musician for many years to come.