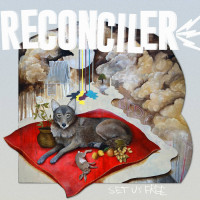 If you nail your first full-length like Atlanta's Reconciler did, then you've got a damn good road ahead of you. A-F Records has done a spot-on job of giving gems over the years -- some old, some fresh -- but here, it's painfully obvious after just the first few tracks, they've struck gold. Think of bands like Red City Radio and Success, and that's the spiritual punk realm Reconciler swim in on Set Us Free.

It's intriguing how many good melodic punk bands are out these days (hey, Red Scare) and how they all manage to keep making themselves sound differentiated from the other. At no point do bands like Reconciler sound tediously like others, and if they do, well it's with added flavour that works. What stands out off the cuff is vocalist Joseph Lazzari sounds like Offspring's Dexter Holland so much, but less edgy and angry. At first, it sounds like Dex has a new band but as the record goes on, Lazzari quickly distinguishes himself as a slightly gruff, highly anthem voice you out to be taking seriously.

Tracks like "All We Have" with its big hooks and bouncy choruses, and "Not What I Used To Be" are prime examples of these shoutalongs that I think folks are going to be enjoying the fuck out of in the pit. Reconciler don't hold back at all waxing Americana, ramping up the pace on tracks like "Rust" which express frustration at the devolution of the American dream, and then slowly burning away on "January" -- a song for kicking the old year away and hoping the new one doesn't screw you over.

In short, life, love and everything in between gets time on the mic, and I think the way Reconciler lays out the map of an American dreamer from birth to death paints a musical novel that's well-worn but still one which you need to sink your teeth into. Character, identity and personality exude off this record, with songs like "Just Wanna Play Rock n Roll" and the ballad-esque closer "Damn The Weather" reminding us that being punk means we're on step closer to being free, and ultimately that's the only dream we should all look forward to, and eventually have. Trust me here, this album's fucking astounding melodically, heavy when it needs to be, and overall, a punk masterpiece in the making.