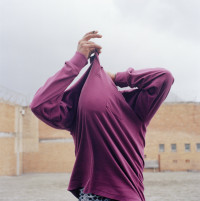 About ten years ago, an acquaintance asked me to check out his new band. When I asked him what they sounded like, he responded; “we’re psych rock”.

“Psych rock?” I thought to myself, “what the hell is that? Like Jefferson Airplane?”. When I finally got a chance to listen to them, I was of surprised to find out that they didn’t sound a thing like Jefferson Airplane. If anything, they sounded like a poor-man's Hives with inaudibly reverbed vocals.

Prior to actually listening to them, a lot of what I had read concerning Johannesburg’s Zoo Lake lead me to believe that they were “psychedelic”. Again, my mind pulled up memories of Jefferson Airplane. Minutes into “Zonk”, however, any notion of hearing “White Rabbit pt 2” melted away. The album’s droning opener, “Anaconda”, had more to do with the bleak, melancholic goth-rock of “Bela Lugosi’s Dead”.

The Bauhaus vibes continue throughout the record with increasing effectiveness. Tracks like “Warble” and the instrumental “Skaffold” feature haunting guitar work and menacing bass lines that would make Robert Smith faintly smile. The first half of the record graciously builds up to the triumphant “The Quarry”. While the nearly six-minute dirge evokes some of the best bits of post-punk and shoegaze (both past and present), it also shows the band at their most original.

While “The Quarry” is a noticeable highlight, the rest of the album carries on in a noble fashion. “Ctrl Alt Del” picks the pace back up with an almost danceable beat and adventurous guitar. On “What Party?”, the droning beat (and what sounds like a marimba?) becomes almost hypnotic.

After snapping out of “What Party?” hypnosis, I began to think about that “psych” label again. Maybe I had been to narrow in my scope. A lot of time has passed since the heyday of psychedelia and a lot has changed. And besides, psychedelic art and music were an attempt to recreate the sights and sounds of LSD or peyote. But not every trip is a sunshine daydream with rainbow revelations. Sometimes our psychedelic experiences take us to dark places and reveal hard truths. And that’s exactly what Zoo Lake has done with “Zonk”. And it’s a trip worth taking.

Girlpool: What Chaos Is Imaginary