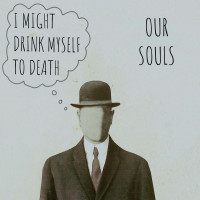 Leicester, England is not what you wold call a hotbed of musical culture or talent, really. I mean, there have been a few bands come out of the place over the years – Kasabian, Showaddywaddy...I think that’s it? Well, here are another one. They’re not massively similar to either of those bands, mercifully. Our Souls (geddit?) are purveyors of exactly the kind of gruff punk rock that you would expect from a band naming their EP after potentially fatal levels of drinking. Scatty, slapdash, grizzled and in all likelihood - drunk.

But putting the aesthetic aside, what are the songs like? Well, it’s incredibly hard to separate the two, to be honest. There are moments in the verses, where the spasmodic guitars take a back seat briefly, you can follow the lyrics and melody - and basically it’s perfectly fine, if very Tim Armstrong-influenced melodic punk rock. However, the charm that Armstrong exudes is maybe somewhat harder to find from Our Souls after a few songs. First song “45” is a relatively straightforward, but decent opener - which is blighted by mixing and timing issues which turns the song at various times into just a mess of instruments all vying for supremacy, which really hurts the melodic aspect. The same is partially true for Track 2 “This Is In G, This Is For The Hustlas”. It actually has the feel of very early MXPX in the first minute or two before descending into a beer-swilling bar-room singalong - which is fine in of itself, but the production (again) in the final 45 seconds marrs what would otherwise be a decent track.

The EP was apparently recorded in both a shoe factory and a front room of someone’s house over the course of 2 days - which gives them a decent shout at claiming a true DIY ethic, but it really sounds like it, too. Admittedly some tracks suffer more than others - closing track “Post-Funny” either through being recorded at the better of the 2 locations or a more rounded production job, sounds far better than the earlier tracks. There are still some timing issues, but I suspect that might be a deliberate ploy for punk rock cred.

There might be something here. Not anything stellar, but something. A band who are fun, gritty and who’s punk rock integrity is beyond question. But it’s really hard to see past the technical issues in this EP. It could be a conscious decision – to truly evoke the reckless, runaway train feel of a live punk show from this type of band, but on this EP, it just sounds amateurish. A shame.

Girlpool: What Chaos Is Imaginary