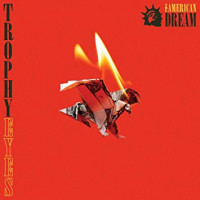 Simply put, Trophy Eyes delivers the most enjoyable pop-punk album since Neck Deep's 2015 release of Life's Not Out To Get You, a set of songs that helped steady a weakening genre. The American Dream is 12 tightly produced and personally written tunes, each unique from one another. There are power chords-a-plenty, relatable lyrics, double kicks and catchy hooks. Yet, the band avoids typical pop-punk tropes, where seemingly every other single as about running away from home or relationships gone awry.

There's a refreshing level of self-awareness in this album. For instance, in the album's main single "You Can Count On Me," lead singer John Floreani croons "I just sell sad songs to the ones who feel alone. You can count on me when it all goes wrong." You could say that's kind of what pop-punk or emo-punk, whatever, has turned into; artists pushing out songs that are dark in tone or theme. With its first single Trophy Eyes shows they get it; they are comfortable appealing to the "woe is me" melodramatic misfits. All their genre mates do it. It's nice to hear a band comfortable in its own skin.

While "You Can Count On Me" is a worthy hit, "More Like You" is the album's best song. Really the first five or six songs are bangers, a plus in a world of ADD Spotify scrollers . It's like if Rusted Root's "Send Me On My Way" met the angsty "Chlorine," the bands most recognizable track from previous work. "More Like You" weirdly succeeds with background vocals "more like you, less like me" in the same key as "send me on my way," blended perfectly with Floreani's voice.

The album's lead track "Autumn" is ripped right from the diary of songwriter Floreani. It's an upbeat, honest and introspective tune about coming of age. Admittedly that's the one that feels a bit tropey. But it works as a driving tone setter. "Something Bigger Than Us" features an aggressive melody with interesting pace variations. While a bit cheesy, "Friday Forever" plays to the band's signatures- that being the baritone voice of Floreani and anthemic background vocals- to produce a pump-up-the-volume third track. While it was a late addition to the album, "Lavender Bay" is a nice change of pace that reflects the bands potential for more versatility.

The American Dream is a bombastic, aggressive collection of songs could have turned messy with a view missteps. Its many cheer-leading choruses feels refreshing rather than overdone. The genuineness of the songwriting could have come off as too personal. Yet, there is enough ambiguity for the the listener to relate to Trophy Eyes. Ultimately, this album proves useful as a needed addition to the pop-punk cannon. It's grander and better written than the usual works from Warped Tour graduates.

And the name The American Dream just fits this album. Trophy Eyes captures that ethos of a country that, in its best times, dares to be bold and innovative while remaining true to itself. As general as that sounds, you feel it in this great work from the Australian-based band. Hopefully more stateside artists will follow their lead.