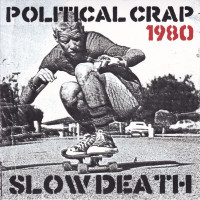 Apparently, Duane Peters and guitarist Mike Jost began jamming over a two month stint in a hospital in Southern California in 1979 (long before Duane started making somewhat dicey statements...). After the two were released, they joined up with members of a local surf crew, eventually settling on Ian McFarlan on guitar, Cris Bark on bass, and Tony Slug on drums to form Political Crap, though the band only lasted for about a year, like many of Peters’s early bands. Before the band broke up after an onstage fight, they recorded 3 songs in 1980 for the American Standard Compilation, Who Cares. The songs are available on vinyl for the first time in over 35 years.

As soon as the needle hit the red wax, I was pleasantly surprised that it was sonically reminiscent of the early Southern Cali sound similar to early Bad Religion, though these 3 tracks were recorded before How Could Hell Be Any Worse. The first song on side 1, “Slow Death” is a 55-second burner with snotty vocals, grungy guitar, and call-and-response back ground shouts. “On Yer Own”, the second tune on side 1 is rhythmically different than the first, yet it maintains the same attitude. It reminds me of a song you’d hear in old skate and surf videos, which obviously makes sense given Peters’s background as a legendary pioneer of skating. The sole track on side 2, “Rejected”, is the slowest of the 3 songs with muted guitar and jangly lead licks, though it speeds up at the end to retain the same don’t-give-a-shit attitude that followed the vocalist throughout his life.

In addition to the amazing musical gems, the packaging makes this a must-buy for fans of Duane Peters. Pictures of the singer in his skating heyday adorn the front cover and record jacket. A lyric sheet and download card is also included. The only downside is that the 7-inch is a bit pricey.

Pedals on Our Pirate Ships: Come Back Home