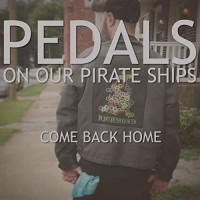 Pedals on Our Pirate Ships

Pedals on Our Pirate Ships is a Punk/Folk band from Richmond, VA that has kind of become an institution for the city. Its primary component is singer/guitarist, songwriter Matt Seymour who is a genuine, bearded and fun representative of the Richmond Punk scene. The band has historically had a revolving cast which usually would include keyboardist and back-up vocals of Adrienne Brown. The band’s stripped down form of punk landed them in the folk punk scene which has kind of fizzled out, but their quality songwriting provided them with staying power. Their sing-a-longs and pure joy of their live performances earned them a warm spot in the hearts of many people in the punk scene. This new 4 song EP, Come Back Home released on Say-10 Records, has renewed that heartfelt enthusiasm.

This new addition to their catalog contains a new formation of the band which is all electric and does not include the cheerful keyboarding or back-up vocals of Adrienne. Although, her presence is missed the new formation sounds very cohesive and the recording quality is actually much better than previous recordings. That being said, the guitar tone is not always the best and leaves room for improvement. Along with that, some of the sweetness that was present in the earlier recordings seems to be lacking to some extent, which might just be a byproduct of the change in line-up.

The songs themselves are actually very good in terms of lyrics and melody. This has always been Matt Seymore’s best quality. He is able to tackle introspective and self-reflective topics in a way that hits the right notes and resonates with the listener. The first song, Odyssey reflects on a common experience or feeling that many of us share. The idea that we are on a dead end road or city and want to change paths/location for a more fulfilling dream. The second song, Nothing Really Matters sounds like it is about to be a downer, but ends up being a really uplifting and inspiring song about believing in and loving yourself. The third song, Down to the Bottom seems to touch more on some negative feelings regarding not meeting your expectations for yourself. Still a good song, but maybe not the best out of the four. Last but not least, Headphones is a simple nostalgia fueled song about how music can help you get through the hard times. Not the best, but definitely a fun time to listen to.

Over all this EP is a welcome addition to the POOPS catalog. It retains the excellent songwriting and spirit that their older music had. Where it lacks in sweetness it makes up with sincerity and punk fortitude. If you want to check out the album you can download it for “pay what you want” at Say-10 Records website.