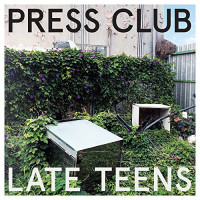 It seems like every other week at the moment, I happen across another band from Australia who are largely unheard of on this side of the world and who are making music which makes that seem deeply unjust. The latest of these are Press Club. The four-piece hailing from Melbourne have been around a couple of years now – with debut single ‘Headwreck’ first airing back in 2017 (although some band members have been playing together since high school). But now the debut album is here, we get a real idea of what the band are all about.

Which is what exactly? Well, it’s fizzing, foot-stomping, punk. The influence of the perpetual sunshine of their homeland is clear to see, as well. The record is 10 tracks, 34 minutes and there really is no filler in here. It’s hardly surprising when you hear that they set up their bassist(Rufio Macrae)’s house as a ‘songwriting sweatshop’ and emerged a few weeks later with around 40 songs to work with. The band trimmed and trimmed until they had the 10 that they thought made up their debut album and I’d say they’ve done a damn good job of it. When I initially heard the back story about the 40 songs (before I’d heard the record), I was a bit concerned that the songs would feel a little contrived, lacking in emotion – forced, basically. But my fears could scarcely have been more misplaced. Vocalist Nat Foster has the perfect tools for this record, she really does. She’s clearly got a technically impressive voice, but employs it in such a fashion that means the passion and honesty of her lyrics are the centrepiece – not the technical ability. That talent does naturally shine through from time to time organically though, and when it does? It’s a beautiful thing.

Musically, we’re at the more indie-inspired end of the punk spectrum for the most part. Press Club are not a band who trade in riffs per se, but man, do they sound like a band. There’s enough pace and DIY in the musicianship to make it feel real, but the production (done themselves, bear in mind) has enough 90’s alt-rock in it that it feels dreamy, jangly and weirdly comforting as well. Check out “Side B” for exactly what I’m talking about – it’s a 1:41 instrumental track – a brave thing to do as a punk band on your debut record, but it’s genuinely lovely and inexplicably fits in with the rest of the record perfectly. But the next track “Ignorance” brings back the lovelorn and occasionally anthemic thing that the band do so well. The guitars throughout are fuzzy and often reverb-laden, but the lead lines come through like a velvet-coated scythe when they move up in the mix. It’s just done so well…

Album highlights (if I had to choose) might be “Headwreck” and “Suburbia”. Both pacey and immediate – making them obvious choices as singles and as such, partially responsible for the band getting the recognition they sorely deserve, in Australia at least. As a result of those songs being picked up by a few radio stations, the band found themselves touring with The Smith Street Band (very fittingly) and already working on a second record. To add to their credentials even further, this was originally self-released back in March 2018, but has just been picked up and licenced by Hassle Records over here, hence my only now being made aware of it. They also do all of the artwork, etc themselves as well. When all is said and done, there’s admittedly not necessarily much here that hasn’t been done before, but when it’s done to this level of quality and integrity, I’ll keep listening for as long as it keeps coming. Press Club? You’re doing it right, kid.

Pedals on Our Pirate Ships: Come Back Home

Ariana Grande: Thank U, Next