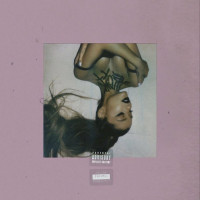 Ariana Grande's "Thank U, Next" is a little misdirected but surprisingly restrained.

Co-written and produced by the vocal gymnast herself, "Thank U, Next" is a luxurious, chocolate box confection of slow r&b trap jams, all soft, fluttery, mellifluous, multi-tracked vocals, from a husky contralto to her trademark high-pitched whistle almost beyond human hearing. The sentiments (and self-obsessed packaging) may be smug, but Grande's incredible technique is applied to seductive beats with surprising restraint. On "7 rings", Grande responds to recent goading with a smart, haughty put down of a deluded rivals with a “Make big deposits, my gloss is poppin'”. Such differences as there are are largely matters of accessorisation: "imagine" is standard bathtime tea-light Chablis chill-out music, "bloodline" anticipates Marvin Gaye re-making "I Want You" with harpsichords, and "in my head" features an incongruous reprise in high-school marching-band style. Any notable moments are entirely down to Grande herself, whether emitting stratospheric squeals on "Ghostin", swapping overlapping vocal phrases with herself on "Fake Smile". There's no denying her extraordinary vocal facility, but it's akin to a Ferrari laying rubber, spinning its wheels furiously but progressing not one jot.