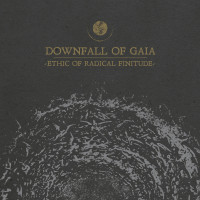 To my mind, the current musical landscape seems like it would be a pretty receptive place to release a new Downfall of Gaia record into. With the ongoing success of blackgaze bands, the burgeoning post-black metal singer-songwriter scene and people seemingly having more time for long-form pieces, then you would have to imagine that DoG might even fancy their chances a bit with the timing of this release. But then DoG aren’t what most people would see as a ‘cool’ band - and they’re certainly not the shiny new thing in the scene; They’ve been making music of this type (admittedly changing bit by bit along the way) for well over 10 years now.

Tragically, I suspect that might end up counting against DoG, when in reality it should be in their list of ‘pros’. At this point, 5 albums in, the band are pretty much masters of their craft. They bring together the patient, considered approach of road-worn career musicians, but they know how to use dynamics to great effect. “Guided Through A Starless Night” is a wonderful example of this - an intro that runs until about 1:40, without ever feeling aimless, but then the blast beats kick in, and we’re off to the races. Similarly, there are points all over the album where the structures are seemingly designed for impact and in the live environment I imagine they’ll be absolutely crushing.

But it’s not all good news, I’m afraid to say. My main gripe with this record, and it’s always a shame when I have to say this, is the production. DoG can be a band of real impact and brutality, but the sound of this album is often frustratingly toothless. Much like you often hear with some ‘modern guitar bands’ (most of whom feature very little guitar) these days, the band’s sound has been seemingly flattened out to the point where the guitars/bass often significantly lack impact and the overall result can be underwhelming. The drums and vocals are certainly front and centre for the most part and that’s not necessarily playing to the strengths of these songs, sadly. The guitar lines and the black metal backdrop that they provide could do with being far more prominent in my humble opinion. The fact that they’re not, might give a more measured, cinematic feel, it could be argued, but the best black metal conjures up its atmosphere by being harsh and caustic, not in spite of it. Maybe it’s just me, though.

Tracking of the record was done by Kevin Antreassian of Dillinger Escape Plan – someone who knows what sound they’re looking to achieve, so it’s probably a fair assumption that this approach was a conscious decision. Especially when you consider the band are also experimenting with clean vocals and even spoken word parts for the first time. Friend of the band, Mers Sumida of Black Table even provides the spoken passage in “Guided Through A Starless Night” for example – and that’s by no means the only notable experimentation on the record, and even better – most of them work and add to a potentially varied and deeply interesting record…it’s just that muddy production. Agh.

I’m trying to work out what my overriding feeling with this record is – because is I really like it. I do. But it could have been something genuinely world class if the overall feel of it packed a little more punch. Higher highs, lower lows, more bleak then more euphoric…but frustratingly it never really goes all in, sonically. There’s that word again: frustrating. That’s my overriding feeling, evidently.

Paper Rifles: The State Of It All