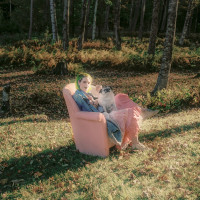 Alt-pop is very cool right now. But it’s a shade that doesn’t work on everyone. While Charli XCX and Carly Rae Jepsen use current trends to their advantage, an artist like Grimes sounds rooted in the alternative. Kelsie Hogue, aka Sir Babygirl, is cut from that same cloth. Her bubblegum pop filters through her unique, out-there personality.

Blurring the lines between LP and EP, Crush on Me is nine songs in twenty-six minutes, two of which are reprises and one is an outro. You’ll know from the minute she scream-chants “I changed my hair” on opener “Heels” whether or not this is for you. Yes, there is plenty of Avril Lavigne influence, especially on “Cheerleader.” The two lines of the hook, “I will kill my reputation, if you promise not to tell” could fit into any top 40 track but the follow through, “I will kill my reputation, if you come with me to hell” reveals the sharp fangs beneath. The song's secretive love story and its “be aggressive” chant only adds to the rebellious nature.

The best song on Crush on Me is “Haunted House” and, yes, it’s the poppiest. But while the music glimmers and the sweetest reaches of her voice are turned up the highest, she’s chanting, “This party's just another haunted house, I can't wait to lose all my friends tomorrow.” “Everyone Is a Bad Friend” could be a Lorde song if the production budget went up a couple hundred thousand dollars. Both “Flirting with Her” and “Haunted House” get reprises and their purpose is clear - the mellowed-out come down to the original tracks. When Hogue sings, “She left her name on my lips” the second time, it’s more serious, more troubling, more emotional.

Albums like Crush on Me are the best kind of pop. They are made with the same ingredients as an Ariana Grande but that’s only surface level. Sir Babygirl is not for everyone. There’s more substance than most pop stars could ever dream of and it seems effortless to her. She doesn’t have to act the part, she lives it.

On The Cinder/The Functional Citizens: Live in Grand Rapids