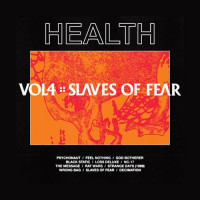 It's been a while since I've really sat with Health. I admit I didn't soak in the remixes and material they put out recently with Soccer Mommy and for Charlize Theron's Atomic Blonde as much as I would have liked to, but the interesting thing about Vol. 4: Slaves Of Fear, their latest full length is that it catches you up pretty quickly on the LA three piece. And make no mistake, as expected, it's one part noise, part electronica and part industrial, carving out yet another pulsating soundscape in the band's repertoire.

What I think stands out most on this record is that Health have moved away from the straight-up Nine Inch Nails approach and have coalesced sounds from fellow noise/goth rockers like Animal Youth and Wax Idols. Sure, you can tell their Purity Ring influence stands tall on songs like "Feel Nothing" but it quickly becomes apparent they wanted to diversify the album as much as they could have. In fact, listen in with headphones and you can quickly picture cinematic worlds for the likes of the Matrix, Judge Dredd and Mortal Kombat draped over these tracks.

Health's dark musical aesthetic feels as fresh as ever, with the standout tracks being "Black Static", which has a moody, existential vulnerability to it, as well as "The Message" -- their ode to New Order (as we knew they would do). There's also a Placebo-like effect on "Strange Days" and a calm dream-pop vibe a la Beach House on "Decimation" that closes things out in a wistful manner. Now, that's not to say there aren't a couple misses like "Rat Wars", but all in all, the androgynous energy of Jake Duzsik on the mic is more than enough to shape another pulsating yet nihilistic soundscape that reminds us how Health ages well like fine wine.

On The Cinder/The Functional Citizens: Live in Grand Rapids