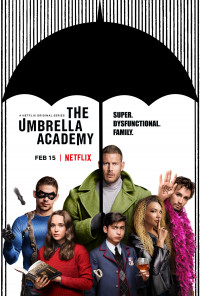 Netflix has done remarkably well in terms of superhero adaptations, outside and inside the comic book mainframe. Apart from the Marvel shows, look at indie/small publisher properties like Polar or The End of the Fucking World. Through The Umbrella Academy, Netflix now gets to drop 10 episodes on Gerard Way and Gabriel Ba's Dark Horse series which premiered in 2008, and it's a pleasure to report that while the show makes drastic changes from the source material, it still hits home in a big way.

Showrunner Steve Blackman does his own thing with the comic creators advising, but things like diversity of the heroes, the decisions they make, sexuality, and their overall stance on superheroism feel more fleshed out as opposed to the book. He combines The Apocalypse Suite and Dallas into one story, bringing forth a time travel adventure of epic proportions. Colm Feore's Sir Reginald Hargreeves has trained his kids who were born through unique circumstances and groomed to save the world from the apocalypse, but as they disband and then get back together through grief, it becomes clear that family is indeed what'll protect humanity's future. But as we said, time travel plays a big role.

Everything from the set design to the cast to the soundtrack -- Way did a few neat covers with his My Chemical Romance bandmates and oh, we can't forget that Tiffany dance sequence in the premiere episode -- fit together so well. It's hard to single out one aspect, but let's just say Ellen Page's Vanya really is the Dark Phoenix Saga that Fox keeps fucking up. Except here, Netflix nails it. This show has the depth, emotion and weird vibe of the book (which honestly could only be true to lore if it were animated), and paints an eccentric picture of how parents influence kids to become monsters. And how these offspring/siblings then consciously handle the power they've been given. The way Season 1 ended, I can't wait to see the follow-up because not even comic fans could predict what comes next.