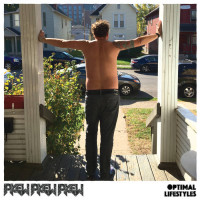 Pkew Pkew Pkew's self-titled debut in 2016 was quite a fucking ride and thankfully something I discovered right here on the 'org. Three years later, with Toronto's rock scene as burgeoning as ever, PPP are back once more flying that Canadian flag so high and as much as we'd mention bands like PUP, make no mistake Optimal Lifestyles reinforces that these guys are the real deal and ready to break down even more doors.

It's another album about beer guzzling and looking for pizzas to get rid of the hangovers, but layered in between it's all about coming-of-age. And make no mistake, the record does tell you to stay hungry and get sober because if you don't, life will fuck you up. Which is what I love about PPP -- as cheeky and insulting as they get, as anti-social and condescending as some of their lyrics come off, this is punk at its most real. It may not be politically charged, but it's about the mistakes and successes in life, and more so the one person we need to point the finger at -- ourselves.

And boy, is this a musical novel on how to clean your shit up (as the record title implies). From the cynical PUP-esque jams such as "I Don't Matter At All" to the happy, go-lucky "Point Break" made for fans who love shoutalongs from the Smith Street Band or Jeff Rosenstock, this is all power/pop/punk done right. Anthemic, catchy and just chock full of big chords and melodic riffs that I can already see fans at The Fest going crazy for. This album is just as good as the debut with just as many rollicking jams that leave you contemplating if you're really meant for more, or simply content enough to be sated with a comfort zone for a few more years.

Trust me, it speaks to us dudes who have quite a bit of growing up to do and I have no problem taking in such examination and accepting my flaws. It's pretty self explanatory on songs like "Drinkin' Days" -- which feels a lot like a Banquets jam (which is a good thing!!!) -- as well as on the banter of the mid-tempo "Adult Party". The latter's really gonna piss rich kids off, but hey, that's punk for ya! Ultimately, by the time the final song rolls around, you can't help but wish this ran a few songs longer, which is indicative of how good the album is. "Thirsty and Humble" is a fitting way to close proceedings and it's the best saved for last. Its rhythm is eerily like one of my favourite Dropkick Murphys songs "Blood" and all I can say is get ready to raise fists and sing along with your buddies that know it's time to kick life into next gear. PPP have dropped another gem that riffs off the punk gospel/adage of the holy Blink 182 -- "Well, I guess this is growing up."