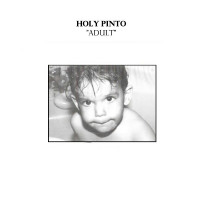 Holy Pinto's undergone quite a journey in recent years, moving from an English duo consisting of vocalist Aymen Saleh and Ryan Hurley, to Saleh by his lonesome navigating life away from their hometown of Canterbury to a lad lost but finding himself in Wisconsin. While the trip's been a very intriguing one for fans who've enjoyed the band's brand of indie/alt./pop/punk, I'd say that come Adult, Holy Pinto is harnessing its truest and most genuine sound, even if it's just through Saleh's voice alone.

After all, less cooks in the kitchen means a brand gets to be its best self, right? Well, that doesn't take away from collaborating or having musicians rotate for live shows, but you can tell what Holy Pinto means to Saleh. It's about remembering where you came from and never letting go of the good -- which is a big part of maturity and being an adult. Of course, that's not to say you don't erase the bad, but not without learning from those experiences which is where I think this record succeeds. It draws the line between the music of old (all that fire of youth stuff) and Saleh exploring his own identity in the wilderness, even if it's now in the welcoming hands of Milwaukee.

From the endearing and catchy love songs like "Daisychain", off the cuff it feels like an album whose sentiment and emotions are all heart-on-sleeve, and highly reminiscent of acts like Say Anything, the eternal optimists and upbeat act known as The Front Bottoms, and also, a band Holy Pinto has ties to in Telethon. Why? Well, stylistically, lyrically and musically on the whole, Holy Pinto has a knack for saccharine jams and the poppier sensibilities of '90s acts like Marcy Playground and Third Eye Blind (just listen to "Salt" when it comes to the latter). But it still reeks of the present-day DIY indie vibe you'd get from a SXSW showcase, and is something I can see Fuelled By Ramen signing.

But it's not just about loving people. It's about an adult loving the home he misses and the one he's now creating in America at a time where division is rampant, and the concept of "the other" is all too daunting. And that's where I think "Adult #2" and like-minded tracks stand out. The same could be said for the opener "Adult #1" -- which is perfect for fans of Ohio's Runaway Brother -- as they wind around math rock, British accents, and encourage you to strap in. Buckle up because in life, "the best is yet to come" and for a stranger to stand tall like this in the face of adversity, it's an album that embraces you with open arms. And as someone who's fallen in love with Milwaukee, its people, art and overall culture, I'm not surprised it's inspired someone to cultivate, craft, refine and finesse such a brutally honest, at-times cheesy but overall resonant record about loss, life and love.