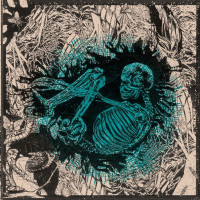 In the music world sometimes it is difficult to see how two things relate without delving too deeply into abstract details and historical context. Ceschi and Pat the Bunny are two very different yet very complimentary musicians who tangentially relate to punk music in different ways. Ceschi is primarily a hip hop musician or rapper that just so happens to write folk songs. He is probably less known in the punk community because he is not necessarily playing punk music. Pat the Bunny is a little better known in the punk community, but is usually more relegated to a subsect of the punk community called folk punk. Outside of the punk community Ceschi is almost definitely better known, but is has also been kind of pigeon holed into a subsect of the underground hip-hop community. People sometimes call him an emo-rapper or folk-rapper because of his lyrical content and use of acoustic guitar in performances. Ceschi as a former straight edge hardcore kid and Pat as a former train hopping crusty punk who glorified drug use probably should not have met and become friends, but through a mutual connection to DIY Bandits and similar ideologies they were drawn together for this rare, but beautiful partnership.

On this release, which was limited to 300 on the first pressing and 500 on the second we get 7 songs from Ceschi and 6 from Pat, including one collaborative effort on each side. For Ceschi (Anonymous Inc., Fake Four), this album was an opportunity for him to replicate his stripped down guerilla type live performances on recording. Many of the songs on this recording Ceschi has been playing live for many years, but had not released on any albums due to them being musically different from straight up rap or hip-hop. For a fan of his work, it was very exciting to see some of these songs put to wax. The first song, Prison Sporks is a folky punky song about Ceschi’s terrible experience while being incarcerated for a marijuana charge. His raw and humorous lyrics show that Ceschi can do the punk thing better than some in the punk community. The second song, Survival Part 1 slows things down and gets more introspective with what sounds like a song played by gypsies after a long journey or at times like a Neutral Milk Hotel B side. You can definitely hear the really strong musicianship of Ceschi and whoever he had playing backing band.

The third song on Ceschi’s side, Black and White and Red All Over is a fan favorite. It is a lightning fast rap about the hypocrisy of religion and the Catholic Church. This song had previously been released with a beat behind it on the Shorted Circuits EP, but Ceschi typically plays this song acoustic live. This version of the song is more representative of the live experience. Galapagos is the next song to come up and it brings us back to that somber feeling with some reminiscence of NMH again. It is quite a bit longer than your average punk song, but is enjoyable. The following song is titled All Dogs Go to Heaven. It is a song that kind of got Ceschi in trouble with its graphic AJJ-esque descriptions of cutting up and eating a dog. (Some people took it literally, although Ceschi is a vegetarian) It is an upbeat melodic song which builds to some slightly intense lyrics. It is very enjoyable. Next is Survival Part 2 which is another slower song that shows off Ceschi’s guitar chops and melodic voice. It is an ornate and melancholy song which is a nice transition to the last song on his side. Stitches unplugged, is a collaboration between Ceschi and Pat where they take turns singing verses. A very strong song which oddly blends their two styles very seamlessly. Over all Ceschi’s side is really great and unfortunately for Pat, difficult to follow.

On the flip side of this album there are 6 songs by Pat the Bunny (Ramshackle Glory, Wingnut Dishwasher’s Union, Johnny Hobo and the Freight Trains) which might be some of the last recordings Pat the Bunny will make. Shortly after releasing these he stated that he would be retiring from music. Through the progression of his music we have seen him change from being a sharp-tongued, drug loving, anarchist to a softer and more apologetic man in recovery. Don’t get me wrong, Pat still has some wit and sociopolitical criticisms, but his lyrical content might have matured just a little bit. Through Pat’s music we hear the growth of a very principled man who is still trying to represent diy, anti-capitalist, and anti-authoritarian values, but in a slightly gentler way. One of the biggest draws for Pat was never his great singing or guitar playing, but his intensity. In that respect, these songs might not meet expectations. In spite of that criticism, they are still some good songs which are self-aware and reflective.

The first song on Pat’s side is a song called Anarchy of Dirt. This is a song about getting sober, attempting to switch focus and live a simpler life while still dealing with internal battles. It includes some other instrumentation to fill it out, but is musically pretty simple. Rather fitting for a song about simplifying your life. The second song is titled The Hand You Reach Out Is Empty, As Is Mine. This song sounds like it is an ode to those who formerly lived agrarian lifestyles who are no longer able to make a living that way due to changes in society which have caused more severity in economic inequality. It is definitely representative of anarcho-socialist sentiments. The refrain “We’re egalitarians with empty hands.. So we must steal everything that we must” is a testament that people are correctly compelled to do what they have to in order to survive, including subversion of laws. I would say this is the best song on Pat’s side of the album.

The next song on Pat’s side is titled Teenage Anarchist which is not a cover of Against me!, but more of a jab at them. It is a self reflective song about staying true to your principles as you continue to age. The song ends with “I was a teenage anarchist and I still am” which summarizes the thought behind the song. The following song is titled I Don’t Know. This song is another with a simple chord progression which allows Pat to focus on his lyrical subtleties. It is a song about living imperfectly in an unjust world never knowing if the path you chose is the most optimal. Pat’s lyrics hold some of his characteristic fire and angst while sounding somewhat sweet and soothing, in a weird way. The second to last song on the album is titled The Club Hits of Today Will Be the Show Tunes of Tomorrow. This is a beautifully modest song which includes Pat on Guitar and a little bit of piano for melody. In this song Pat shows some self-awareness and a little despair; living a life voicing certain principles and values, but effectively just trying to make it through the day. It’s a little sad and a little relatable. Lastly, we have This City Is Killing Me, which is a collaboration between Pat and Ceschi where they take turns singing verses. Both seem to lean into their self awareness and speak of personal hardships. The na na na’s might get stuck in your head whether you want them to or not.

Overall this is a really excellent and unexpected album. It was very satisfying to hear these two team up and make something unique and special. I ordered this album before it was released without hearing anything from it until putting it on my turn table. The fact that there was no digital release and this was the only way to get a taste made me have that feeling and excitement of being a teenager again while listening to something for the first time. It also came with a bunch cool swag like posters and inserts which made it way worth whatever measly $20 I spent on it. In retrospect, Ceschi proved he can play folk punk better than most punks and if Pat never records anything again this will be a fitting end to that moniker. For those of you who did not get one of the 800 physical copies you can listen to the entire thing on youtube.

The Hangups: No Expectations