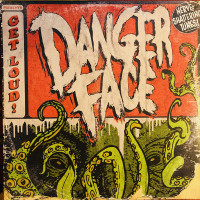 Ok. I’m going to have to control myself a little bit here and not completely lose touch with journalistic objectivity. But even with that in mind, this record absolutely demands the attention of the wider punk community. That means you good folk.

So. A largely unheard-of Norwegian punk band out of a town I’m guessing even less people have heard of, on their debut record. They’ve been a band for maybe 3 years and at the time of writing have less than 17,500 monthly listens. So I guess it can’t be that good, surely? Well, It is. But what is it? Well imagine if Cancer Bats and Orchestra of Wolves-era Gallows had a baby, but that baby was born with innately cool Scandi style and a flair for the best rock ‘n’ roll flourishes and intonations in their riffing and solos. That’s what you’re dealing with in Dangerface. I know that’s a lot of praise in one “sounds like” description, but I stand by it. Fuck it. Throw in The Bronx while you’re at it. And Refused. You can pick out all of them at various points, but Dangerface aren’t aping them - they’ve got their own style – and above all else, they’ve got their own tunes. BIG tunes.

I’m gushing a bit, aren’t I? It’s just hard not to. It’s genuinely hard to find anything to legitimately critique on the record. The production is super tight, too. The drums pound and snap in equal measure, the lead guitar does that OD1 setting thing of sounding heavy without really being distorted, the vocals are brimming with character but completely chord-shreddingly ferocious, their ability to pick melody out from the ashes of a breakdown is the best I’ve heard in years, and just the feel of them as a unit is pretty much everything I crave in modern punk. It could feasibly be a bit heavy for the more indie or pop-punk leaning listener...but if you like punk and can’t find something to love here, then I feel like maybe either you’re missing something or I am.

If I were to pick out standout tracks, then I’d honestly have a real tough time. It’s 10 tracks, 37 minutes, and the quality doesn’t dip at any point. The opening 3 tracks are all 10 out of 10’s for me, especially. The elastic riff towards the end of “Apocalypse on the Radio” that sits over the organ refrain, which then turns into a weird kind of 80’s pre-outro and then the track goes full Guns ‘n’ Roses before disappearing with a brief 12 bars which are stripped back to the building blocks of the song that just reminds you how far the track brings you in its less than 4-minute runtime. Brilliant. From there, it’s straight into “Let It Burn”. A song that with both piano and doo-wop backing vocals in its super-anthemic chorus, leaves you wondering (and not for the last time) how in the hell this is a band on their debut record. I honestly think it would work in dive bars or stadiums alike. Hell, there are even dual lead guitars that pop up from time to time across the record and every time they do, I want to down a beer and lose my mind. Outrageous behaviour from a punk band - deployed in the very best way.

So there you have it. It’s February and I’ve found something that is not only going to be in my 2019 end of year list, but unless 2019 goes completely nuts, it’s something that will be at the business end of it as well. I fucking love it when something comes out of nowhere like this and just slaps your teeth down your throat. These guys are the real deal. Listen to them lots, buy their merch, and make sure they can tour EXTENSIVELY.