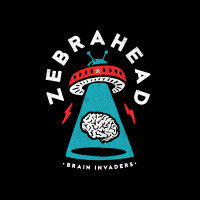 Look, I am as surprised as you are to see me giving this album four stars, trust me. I think at this point I’ve written about Zebrahead on this site more times than I’ve written about almost any other band (aside from Anti-Flag). Every time I’m just saying the same thing: yes, it’s fun, but it’s certainly not good. Zebrahead has always been shallow and pandering, but good god are they a fun time. They remain, and will probably always be, my all-time favorite guilty pleasure band. So when I started to listen to Brain Invaders, I fully expected the same sort of nonsense that Zebrahead usually puts out. But as I lay in bed early the morning of Friday the 8th listening to this new album, I found myself revisited by the same thoughts: “Am I actually enjoying this album unironically? Is this actually good?”

For one thing, on most Zebrahead albums, this pop-punk/rap group often forgets that they have a rapper in the band and try to write conventional pop-punk songs that lack any rap elements, leaving the band’s rapper, Ali Tabatabaee, trying to scramble to awkwardly fit his rhymes into songs that really have no space for him. Brain Invaders doesn’t do that nearly as much. This is really the Ali Tabatabaee show on the band’s twelfth album (or thirteenth album, depending on whether or not you count their self-titled album), with him not only being featured more prominently than on past releases, but also with Tabatabaee putting in his best performance to date. He comes up with some really unusual rhyme flows at times, like on the twisted “I won’t Let You Down,” and really shows how much he’s grown in the over 20 years that this band has been together. “Up In Smoke” is probably Tabatabaee’s finest hour on this album, with the bizarre little pop-ska kitschy song perfectly designed to highlight the rapper’s skills. That’s not to say that the other vocalist, singer Matty Lewis, is any slouch on this album. If anything, he and Tabatabaee are complimenting each other on this album in ways they never have before. While Lewis isn’t an original member of the band, Brain Invaders is his ninth album with the band, so his chemistry with Tabatabaee has finally reached its peak with this album.

Another thing that’s strikingly different about this album compared to most of their other releases is the distinct lack of party anthems. Even the track “Party on the Dancefloor” doesn’t actually seem to be about a party or a dancefloor. Sure, there are plenty of their normal shallow feel-good, shout-out-to-the-weirdos songs like “We’re Not Alright,” the song that shows them doing a pretty perfect impression of Blink-182. Still, their feel good anthems feel more endearing here than they have on past albums. There are also songs like “Chasing the Sun” that I highly suspect are about nothing but simply piecing together cool sounding lyrics, but there are also attempts to make actual political points that don’t sound nearly as hamfisted as some of their earliest attempts at political commentary. The aforementioned “Party on the Dancefloor” features the lines “The rich that ditch the immigrants to fight a new war/They wanna build a wall as they party on the dancefloor,” which is a pretty obvious dig at Trump supporters, perhaps an attempt to apologize for their early song “Get Back” which referred to Donald Trump as “my man” (it was 1998, give them a break). The song shows, by far, the greatest political intelligence of any Zebrahead song, and at no point do they end up sounding cheesy or like they aren’t up to the task of talking about politics.

Musical skill has never been one of Zebrahead’s flaws, and Brain Invaders continues that tradition. Guitarists Matty Lewis and Dan Palmer, the latter of whom the band shares with Death By Stereo, play off each other really well with some pretty pummeling guitars at times. Some of the songs hit really hard, while the band also introduces ska elements more often than on past albums, particularly in “You Don’t Know Anything About Me,” “Chasing the Sun,” and “Up in Smoke,” proving my childhood best friend, Joe, wrong when he said starting a ska-rap group “wouldn’t work.”

It’s really hard to believe that Zebrahead has been around for over two decades now, but that’s apparently how long it took for them to actually become good. Now just comes the question of whether Zebrahead will continue to get better, or if they’ll become like that distracted boyfriend meme with their head always turned towards fame and profit (overseas only, of course) and away from artistic integrity. But for at least one album, I’m actually proud of my once guilty-pleasure band that I’ve been following since the late 90’s. For once, I don’t feel guilty about them anymore.

The Medicine Dolls: A Compulsion to Ruin [EP]