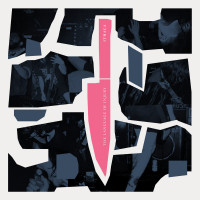 If you heard someone talking about a band that included members who were non-binary, had ethnically-diverse backgrounds and a female vocalist, I’m guessing your first thought wouldn’t be that they were talking about a hardcore band. Whatever politics hardcore has been involved with up to this point, a clear majority of it has been made by white dudes. It’s maybe not a particularly comfortable fact, but a fact it remains nonetheless. When you think about that a bit more, then it almost becomes a bit farcical; The group in society that (broadly speaking) receives less discrimination, castigation and marginalisation than any other, raging against societal injustices - with very little representation from the people who feel the keen sting of that very same injustice (again, broadly speaking) far more directly and personally. But now London’s Ithaca are here to have their say.

It's important to note that this refreshing difference isn’t what Ithaca are, per se. It just means that the band’s constituent members have such diverse points of view, experiences and influences, that this record was always going to be a bit different. But then different isn’t always better, of course. Some of the best hardcore records of the last few years have been of the straight-down-the-line, smack in the teeth variety. But equally we’ve also had the likes of Turnstile changing things up a lot (to the point where whether they’re still a hardcore band is disputed, of course). So what does this rare diversity actually sound like in the hands of Ithaca? Well, it’s gratifyingly hard to pinpoint. You can pretty safely start from the bedrock of Hardcore, but there are plenty of metallic tinges, although it never goes full metal. In fact, I’d be inclined to say the tech/math elements are more prominent than the metal. Then you have to consider the songs themselves - there are 3-minute ragers (New Covenant, Impulse Crush), ethereal 2-minute instrumentals such as “(no Translation)” and even 5 minute epics (“Better Abuse”) which swing wildly from shimmering effervescence to brutalist, staccato riffing and all that lives between.

The vocal attack provided by Djamilia Azzouz matches the riffing with its intensity. She has a lot to say and knows how she wants to say it. Her rasped, occasionally sneering style sits alongside the rapid, syncopated backdrop excellently. But again, the diversity of messages and subject matter within the songs means that the musical canvas needs to shift with each new track - and Ithaca manage to do that incredibly well. It’s a legitimately impressive achievement to cram so much variety and genuinely original content into a record that clocks in at just half an hour across 10 tracks. But for me, this is pretty much the perfect length for a record with this much going on and this much intensity. It holds my attention all the way through each time I listen and that’s not something I can say about a great many hardcore bands in 2019.

One final thing that bears mentioning - this record came out over a month ago, I’ve been listening to it regularly since then, and I’m still picking out nuances I’d not noticed before on each listen. It’s pretty dense with detail that you can enjoy picking out if you’re willing to give it your time. Which I would really recommend you do, putting it bluntly. A final note, though - if you think it all sounds a bit too clever and not ‘hardcore’ enough for your tastes? Just listen to the 2 opening tracks and it’ll become clear there’s easily enough brutality here to keep the most ardent purists happy as well. Plus it’s on Holy Roar, so it was always going to go hard. Yeah. This is well worth your time.

The Medicine Dolls: A Compulsion to Ruin [EP]