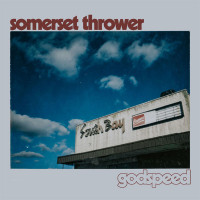 Long Island’s Somerset Thrower are yet another band skewering the 90’s grunge and alternative sound and combining it with a touch of contemporary punk flavour. The band’s new LP titled Godspeed continues in the bands familiar style of hook driven indie rock.

Somerset Thrower tread the familiar indie rock meets-90’s grunge, meets-contemporary mid-tempo punk rock, territory that feels quite similar to bands like Beach Slang, and Turnover, with a heavy dose of 90’s Dinosaur Jr. thrown into the mix. While there is an underlying element of punk influence, I would stop short of labeling Godspeed a ‘punk’ release.

The songs are well written and catchy, particularly ear catching are “Grace in Heaven” and “Jellyfish Scene”. The melodic croon of the vocalist is memorable and soothing, and the vintage nostalgia feels real. I can see Somerset Thrower appealing to a large and diverse fan base from punk rock to straight up indie rock fans. The band’s subtle aggression could find them sharing the stage with bands like Pup or Iron Chic, but is scaled back enough to appeal to the more mainstream alternative Gin Blossom’s super fan. The majority of the songs are a based around a mid-tempo and driven indie rock feel, without much departure from the standard rock beat. The lyrics are well put together with a poetic feel that nicely project through catchy choruses.

Somerset Thrower have produced a well-rounded and competent release with Godspeed. The selling point here seems to be 90’s nostalgia, in which the band does a solid job of delivering. The problem here may simply be oversaturation, and while I enjoy Godspeed, I am doubtful I could pick the band out from a playlist of similar sounding artists. The 90’s wave is as popular as it has ever been, and even with a solid release, like Godspeed, Somerset Thrower may end up lost in the crowd without much further innovation or dynamic.

Ithaca: The Language of Injury