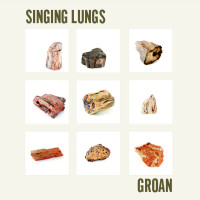 Sometimes, when a band really has their shit together, they’ll send me a digital bio to go along with their music. Sometimes, something in the bio will grab my attention before I ever hear a note. That was the case with Singing Lungs. First, these older guys do in fact have their shit together. Second, I was sort of fascinated by their day jobs. Guitarist/vocalist Jason Kotarski is a gamemaker. He is someone who invents new games. I mean, I know somebody has to actually create new games, but I’ve certainly never known anyone who made their living that way.

Bassist Sean Murphy is a zookeeper! (See my comments about gamemakers.) Drummer Ben Graham is described as a veteran touring punk musician. Normally that would seem pretty impressive, but here it seems tame by comparison! Singing Lungs are based in Grand Rapids and Lansing, MI, after having formed in Flint in late 2015. Groan is the band’s debut full length, and was expertly produced by Rick Johnson at Cold War Studios in Grand Rapids. I continue to be impressed by the sound of the projects coming from that studio.

They say they are for fans of Smoking Popes, Samiam, Superchunk, Lemonheads and Gin Blossoms. While that may be true, I hear more of an ‘80s Minneapolis sound. Specifically songs and guitar tones heavily influenced by The Replacements and Hüsker Dü. There are also clearly elements of grunge and pop punk. The songs on Groan alternate between fuzzy power chords and twangy open chords. All the songs have catchy choruses, and some have catchy little guitar leads too. Kotarski’s voice is a bit of an acquired taste, but ultimately his sincerity will win you over.

What Singing Lungs don’t have are songs about sex, drugs, and rock and roll. There isn’t much angst or anger either. Most of the songs are about something closer to domestic tranquility. “Home”, “Where I Belong” and “I’ll Be Right Here” are good examples of this. “I’ll Be Right Here” could only be sung by a confidant man, as it celebrates his role as a house husband. “Hanging Around” and “I Wanna Watch TV With You” are Ramones inspired pop punk love songs. “Without You Around” wraps things up om a slightly more serious note. I’m not sure that Singing Lungs would resonate with people in their 20s, but Groan strikes the right chord with this old domesticated dude.