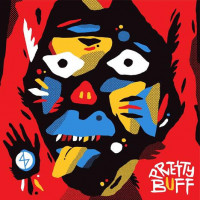 In 2018, an incredible amount of words were spilled about the way algorithms, streaming services, and curated playlists affect the way we listen to music. While these critiques mostly looked at the rise of these listening trends in the context of what it means for sustainable careers in the music industry, there’s another facet of this shift in music consumption. A younger crop of artists now has access to a wide spectrum of music to take influence from in a way that just a few years ago was unthinkable. In the punk scene, the genre that took this evolution most to heart was hardcore. We saw a spat of releases that pushed the genre forward incorporating influences from across the alternative music spectrum.

With Angel Du$t’s Pretty Buff, the hardcore community has the first foray leaning into this trend in 2019 and expanding the influences recently seen rearing up in the genre. Angel Du$t made a name for themselves touring with the likes of fellow travelers Trapped Under Ice and Turnstile blasting out pop-centric hardcore riffage in the form of short and fun punk songs. On the Will Yip produced Pretty Buff, the band nearly abandon this formula in favor of new sounds, a more danceable beat, and incorporating the indie-folk of a band like the Violent Femmes.

To be clear, the foundation of Angel Du$t is still in place, but only in Pretty Buff’s underpinnings. It peaks through on songs like “Push” and “On My Way.” These songs move along at a double-time pace ending in the type of party centered breakdowns fans have come to know, although now tempered with acoustic guitars, a wider variety of percussion, and the occasional saxophone. This expanded palate of sounds is prominent throughout all of Pretty Buff. The band doesn’t try to hide this or ease the listener into their evolution. Opening track “No Fair” lays it bare from the start.

Pretty Buff has numerous stand out tracks. You can hear the Violent Femme’s influence most clearly in “Light Blue” with its walking bass lines and indie folk influences. Previously released singles “Big Ass Love” and “Bang My Drum” are incredibly energetic songs. The latter is peppered with bongos and the best saxophone solo in recent punk rock history. “Want It All” comes close to the 90s alternative rock of a band like Third Eye Blind. An acoustic guitar solo slides in and out of rhythmic drums and electric guitars before winding down in a 6/8 jam session.

Angel Du$t have always been a fun and positive band. On Pretty Buff, this is no different. “Park” is a love song about walking your dog at the park. Vocalist Justice Tripp sings, “I’m in love whenever flowers grow / As long as water’s wet / Everything’s a flower.” The song works as an ode to an extremely good dog and the exciting start of romance that comes with just hanging out in a park getting to know someone on a spring day. In fact, these are recurring topics on the album. “Take Away The Pain” addresses a new love interest opening up with, “Gotta like my dog / Rock ‘n’ roll / For us to get along,” before listing out the litany of things the smitten individual promises to do in return if the crush is reciprocated. Sunny mosh calls also abound. “Come on give it all you got / Make it hot / Push it to the limit,” announces Tripp on “Push.”

Pretty Buff is record made without fear. There is no doubt this is exactly the record Angel Du$t set out to make no matter what the reaction would be. It just so happens to be an exceptionally fun, melodic, and enjoyable album sure to make waves. As the winter thaws out and the sun peaks its head out of the grey, Pretty Buff offers an exceptional soundtrack about what possibilities lie ahead, whether that’s a new crush or simply a walk around the park with an extremely good dog.

Overkill: The Wings of War