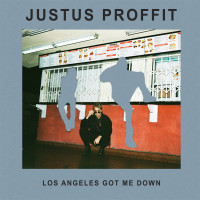 For some time now Justus Proffit has been grinding it out on the DIY/indie/punk scene. The EP with Jay Som Nothing's Changed piqued my interest, and it's intriguing to see how a full-length has been shaped, not just by ambition, but by the shadow of death in the wake of his girlfriend's passing three years ago. What's quite interesting is how the City of Angels has factored in big time as a comforting cocoon in L.A.'s Got Me Down, reiterating how important our backdrops and overall homes are to our recovery process and lifescape.

If you ever wondered if there's another Heatmiser out there, then this record should answer that for you. On so many tracks you get a sense that this record channels every ounce of energy they, and Elliott Smith, put into that '90s sound that left such big impressions. From the jangly, garage feel of "Shadow of the Cross" to songs like "Hole", it feels like you're transported to the Good Will Hunting soundtrack again. And as if that weren't enough, there's an alt/dream-pop vibe on "You" which shapes it as one of the most surprisingly pleasant songs on the record -- catchy, melodic and a punctuation mark that this is indeed a warm, breezy summer record come a little too early.

Now, as much as these songs work, I think the record lacks some intensity, which is the closing track provides. "Closed View" is drenched with a thick bassline, oozing reverb and feedback that shows JP's punk aesthetic is still there, and hopefully we get to hear more '90s influences incorporated in the future -- whether it's grunge or straight-up emo. In short, this is a dark musical novel but it wears its pain so sweetly on its sleeve, you'd never know about the formative tragedy that preceded.