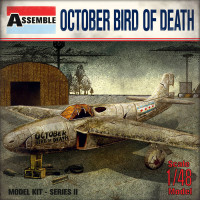 Fuck the internet. The best way to discover new music is still going to punk shows at dingy clubs, catching a band playing a ferocious set, buying their record, taking it home, and hoping like hell that they were able to capture that same fury in the studio. That’s the story of how I found October Bird of Death. The Chicago based hardcore quintet was in Grand Rapids for a small punk festival. I had never even heard of them, but I was immediately impressed by their angry, angular sound. I picked up their Assemble seven inch, (on purple wax), and have been listening to it steadily ever since.

The five songs that make up Assemble are a decent chunk of music. It feels like half a hardcore LP. The guitars are heavy and razor sharp, and the beats are propulsive. The vocals are talk/yelled in way that might remind you of a more hostile, less hip hop influenced Rage Against the Machine. Assemble also recalls the intensity of fellow Chicagoans Articles of Faith. The lyrics are bleak, but have a certain literary appeal. “Beckoning Beast”, “Vices”, “Outlier”, “Splintered Bones” and “Shadows Like Teeth” all seethe with a hopeless, bitter viciousness. I wouldn’t exactly call them sing along songs, but they’re all fairly catchy. There is no joy in October Bird of Death, just serious, well executed hardcore.

The packaging of Assemble is also worth mentioning. The full color front/back cover is heavyweight and looks like the box for a model airplane. The lyrics are included on a separate page meant to resemble the instructions. It’s also hand numbered. I got 88/300. If you ever get the opportunity to see October Bird of Death at some shithole bar, do it. Grab a copy of Assemble while you’re at it.

Hotel Books: I'll Leave The Light On Just In Case