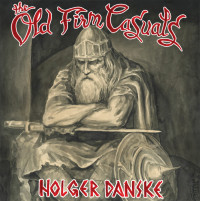 The Old Firm Casuals, in my opinion, have always been the most consistent of the multitude of Rancid side projects. (I’d like to say the most productive too, but I think Tim Timebomb has recorded like 2 billion songs.) They always knew who they were and what they wanted to do, and have never really strayed from that path. Holger Danske actually shows some musical progression, and that’s a good thing. Sometimes it’s a very good thing. Somehow this this is only OFC’s second full length, but it joins an ever growing pile of vinyl EPs, splits and singles. If you enjoyed their previous long player, This Means War (2014), chances are you’re going to love Holger Danske.

After a couple of listens, I couldn’t help but notice that Holger Danske adds a whole new set of influences. Or at the very least, it lets those influences take center stage. I hear a lot of Motörhead, maybe some Venom, along with other various New Wave of British Heavy Metal bands. They combine that with their more typical AC/DC meets Cockney Rejects sound, and the result is harder edged take on The Old Firm Casuals. They’re not afraid to get political either. Lars Frederiksen also continues to explore and find inspiration in his Danish heritage, so that stamp is all over this thing too.

Opener “Get Out of Our Way” starts with a horn sounding before kicking into Venom territory. “Motherland” is one of the record’s key tracks, and has the first of a handful of riffs that would make Angus Young proud. The title track is the true centerpiece. It revisits some of the musical and lyrical themes of “Motherland”, then makes it more epic and adds a catchy whoa style vocal hook. Side A closer “Casual Rock ‘n’ Roll” is the most AC/DC like song on Holger Danske, and certainly the most fun. It also continues the tradition of self referential songs that started with their first EP.

Side AA opener “Traitor” is probably the best track on the second half. The back to back one two punch of “Nation on Fire” and “Zombies” closes the record on a high note too. In between is the second of the record’s two instrumentals. The title Holger Danske is a reference to a great (French or) Danish warrior and folk hero who slept until the time came for him to rise up and defend his nation. I guess the parallel is that The Old Firm Casuals are going to help fight against the rising tide of fascism in the US. That’s an unreasonably lofty goal for a band or record, but it makes Holger Danske an awfully good listen.