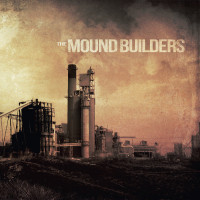 When I was a kid, the rules were simple. Your first album was self titled. That was that. Now, things are much more complicated. It seems like bands can just release self titled albums any time they want. (I blame it on Metallica.) Or maybe there is some rhyme or reason behind it. Maybe it can signal a reboot of sorts. Or maybe they just couldn’t come up with a decent name. Either way, the new record from Lafayette, Indiana’s The Mound Builders is self titled. I had previously heard the quartet on the four band Split Hits the Fans #3 7”, and a 12” split EP with Pale Horseman, both also on Failure Records & Tapes.

The Hoosier quartet turned 10 years old in 2019, and The Mound Builders is their second full length. The sound is a cross section of several heavy subgenres. There’s some doom, some thrash, and maybe even a touch of crust punk too. The influences come together to make a thick slab of sludge. It might remind you of some of the stuff coming out of the swamps of New Orleans like Crowbar, Eyehategod, Down, Superjoint etc… It’s definitely not something you’d expect to hear in a small college town in the Midwest.

Side A opener “Torchbearer” (this would have been a pretty good name for the album, guys) starts out with a slow, tasty Black Sabbath type riff before the second half picks up speed with a faster Sabbath type riff. The lead vocals are delivered with a throat shredding intensity that will leave your ears ringing. “Hair of the Dogma”, beside being my favorite song title on the record, alternates between straight up thrash and bluesy guitar leads. “Separated From Youth” is mostly slow and heavy, ala Crowbar. The first half of The Mound Builders ends with “Acid Slugs”, a song with a lumbering intro that turns into something resembling Amphetamine Reptile noise thrash.

Side B is much of the same, and I don’t mean that disparagingly. While there is a certain formula to the songs, there is also a surprising amount of subtlety and variety. “Star City Massacre”, “Regolith”, “Broken Pillars” and “Vanished Frontiers” are all unflinchingly heavy, but still distinct. I pick up more small details with every listen. The Mound Builders also made the interesting choice not to layer additional rhythm guitar under the guitar solos. With only a single guitar, it not only makes these songs easier to pull off live, it really makes the solos pop.

Whether or not you enjoy The Mound Builders may depend on what you think of the singer’s voice. I’d put it somewhere between Kirk Windstein (Crowbar) and Barney Greenway (Napalm Death). It’s not George Fisher, or Chris Barnes for you old schoolers (Cannibal Corpse), but it’s pretty harsh. Ultimately, I think it’s well suited to these well constructed songs. Maybe it’s because the winter just wouldn’t seem to end this year in the Midwest, but for me, this record really hit the spot. (Despite its lack of a name!) If you’re not afraid to take a walk on the heavy side, you should definitely check out The Mound Builders.