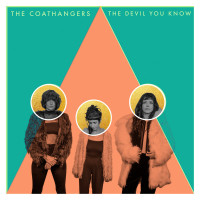 The Coathangers have always walked the razor’s edge between wacky fun and sheer blackness. Sure “Getting mad and pumpin’ iron” was about annoyance and depression, but it was also a hilarious portrait of someone furiously slamming stacks at the gym. Likewise, “Squeeki Tiki” might have been about cutting off bad relationships with equal parts joy and regret, but c’mon, if that dog toy didn’t bring a smile to your face then you were a statue. Yet on their sixth album (and third as a power trio), an ominous pulse radiates through the record, even when they are having some fun. The Devil You Know is about confronting “Devils,” be they bad people, bad habits, or bad versions of you, and the three women here smash through a whole mess of them.

Now firmly comfortable as a three-piece, having lost their keyboardist Candice Jones a few years ago, remaining members Julia Kugel (guitar), Meredith Franco (bass), and Stephanie Luke (drums), have settled into filling in the gaps with a spartin simplicity. A profound confidence is demonstrated throughout the record and the group makes the timeless argument that strong simplicity beats fancy fretwork- and it always does. BB king actually didn’t play that many notes, but each note, smashed like a sledgehammer. The same rule applies here. “Step Back”’s core riff is blocky dunna-dunna-dunna, but it has the same strike and hook as Gang of Four or Wire’s best stuff. Kugel is often credited for her earnest lyricism, but what’s understated is how she can crush a riff with both power and at other times, a restrained genteelness. Find someone that can drift from late 60s acid psychadelia to ‘90s grunge in a single measure and make it look this easy.

See, too Luke, who, this time around, has kept her titantic power-punch and also added in an almost marching band form of catchiness. Do you know why the Stones always say Charlie Watts is the world’s greatest drummer? It’s because he makes the songs and we don’t even know it. Stephanie Luke does know it and follows in stead. Along those same lines, one often feels that Franco is perhaps the most self-conscious in the group. She rarely does interviews and when the trio are speaking as a group, she usually defers questions to Luke and Kugel. This is a mystery because Franco plays with the refined, effectiveness of the first wave post-punkers. When Peter Hook plays two notes and lets them hang against a busier guitar line and circular vocals in order to hold up the other two and then he nods at the audience as if to say, “this is why I’m great.” Franco is equally as great- her bass sets tone of album centerpiece “Stranger Danger” and creates an underlying menace that ripples throughout the rest of the album.

And really, that menace is what gives this album it’s delicate character. Many a-many songs about facing down one’s demons (or letting those beasts overtake you) are volume ten screamers or stripped back acoustic ballads. The Coathangers take the, perhaps, more difficult third route and it pays off. A creepy crawl slithers through the album as the band address fiends holding them back. “Lithium” wears the dark cloak as those bleak 60s garage rockers and the band looks through the eyes of someone with an opiate addiction. They’re isn’t a judgment here, or even the an explicit tale of sorrow- just a objective dip into the bleakness of a situation (with a slight bit of hope tacked on the end). It’s a wise way to play it. The band generates experience not through telling, but fro setting you inside the subjects skin. “Bimbo” has a sort of grim gentleness to it, as Kugel coos “It’s not easy for a hear tthat’s stuck in limbo/ it’s okay cuz you’re a bum and I’m a bimbo/ I am not the one you’re looking for…” But, just as Kugel displays a melancholy subjectivity, Luke comes in as the roaring lioness, “I guess that now I know/the world’s got other plans,” playing an objective acceptance of universal force against Kugel’s more ground level observation. It’s cleaver and works to explain the universal station of heartbreak from two viewpoints. Though, as is the band’s wont, the track isn’t just “boo hoo hoo, I’m sad.” Rather, it’s “I’m sad but I’m choosing this path and accepting that’s the way it has to be.” That’s a nuanced take that allows the song to be dissected by the listener over and over without ever truly getting to the core. That’s poetry and it reaches the black levels of Nick Blinko and that’s about the highest compliment I can give the band.

They do go for the direct strike here and there. “F the NRA” is one of their punkest bangers ever and it’s refreshing to hear the explicit statement spit out without reservation and from a group that touches thigns other than politics as well. that is, no one really cares if you’re favorite d-beat band says “I hate the NRA.” But the three gals that also sing about dumping jerkward boyfriends saying this? Somehow, it has more punch here.

Yet, it’s not all getting pulled down by devils. “Memories” has a line that could fit right in with any Motown mega hit. “I’ll be your lighthouse in the dark,” calls out Franco in her wonderfully delicate vocals. It’s a beacon of light in an album that often revels in the pit, despite the fact that the group wears halos on the cover. But, that’s kind of the point. Yes, “Last Call” is a circle put crusher about drowning in booze. Yes, the Grim Reapers smiles that morbid smile on “5 farms.” But, the message on this album doesn’t seem to be there’s no hope. Rather, just as Kugel whispers, “I need an answer” on Lithium, the group is saying that there is hope in the blackness. Holding on to the hope is a struggle, but it’s a struggle worth the fight.