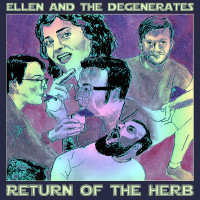 Ellen and the Degenerates

Few releases are as bittersweet as Ellen and the Degenerates first proper studio album, Return of the Herb. Almost immediately after album release, the band stated that they are breaking up. Even worse is that like few debut LPs, Return of the Herb capitalizes and fully realizes the promises made by the band’s earlier demos and EPs.

Return is rooted in singer Elena’s skewed perception. “Beach Dumpster” is ostensibly about seeing worth in oneself despite society’s finger pointing, but it’s told from the surrealist perspective of a heap of trash come to life. As she details the trash-persons construction, “limbs of toilet tubes/ wrappers for guts” a claymation vision of this pathetic creature crawling along the gravel pops in your head. That’s how strong this imagery is.

Yet, a persistent darkness slithers through the record. “Knuckles,” which is built off huge, fuzzy guitars and crushing guitars, is about living in a crushing 2019 and trying to power through. “Not my Friend,” which might contain a slight Bad Canoes homage, is about poisonous friendships and cutting that off. Yet, in lieu of an emo-centric “boo hoo hoo,” Elena frames these defeats and losses in a classic early West Coast context. That is, there is loss here, but every loss is tagged with a venomous attack. “I don’ even care that you liked me for a time,” Elena snarls, “doesn’t even matter because you made me feel like crap.” Alice Bag or Penelope Houston couldn’t have said it more straightforward or better.

No doubt, one of the reasons that this release packs such a powerful perspective and poppy punch is because the band creates a downright sunny, high energy backdrop. The riffs here are huge, chunky, and bright. “Big Bones,” which depending on how you read it, is either an attack on people who constantly make excuses or and defense of all body types, might be a slick vivisection, but the rushing guitars make the track sound like a victory lap, not to mention to meaty guitars which give the track real pop. “Problems” smashes as hard as any Dangerhouse single and at times seems to borrow equally from Pat Smear and the Double Dragon soundtrack. “Fast Times” skewers dumb rock and roll, but as the band rips through a party inducing chord and as Elena adopts a pseudo-Joey Ramone drawl, it kind of makes the argument that dumb rock n roll is also awesome.

Like many of the great punk records, Return of the Herb masterfully slides bent perspectives and surreal observations behind fist pounding punk that’s as catchy as it is menacing. That’s not easy to do, but they make it look that way. And, like many great punk records, the fantastic debut album is also their last one. May it sit in a shroud made from equal parts joy and despondence alongside the championed discs of yore.

Free Throw: What's Past Is Prologue