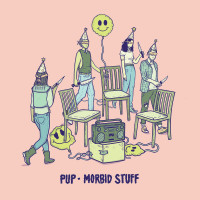 PUP has never been a band to shy away from their feelings. But on Morbid Stuff, they leave nothing to the imagination, resulting in their best effort to date.

Morbid Stuff opens on a way too honest note, “I was bored as fuck sitting around and thinking all this morbid stuff, like if anyone I’ve slept with is dead.” The first line. The eleven songs do nothing to alleviate this feeling of the world closing in on you, with singer/guitarist Stefan Babcock going straight for the jugular. Two favorites include, “Or better yet… I hope the world explodes, I hope that we all die, we can watch the highlights in hell, I hope they’re televised,” from “See You At Your Funeral,” and “I’ll be sure to write it down when I hit rock bottom, for all the people who love to fetishize problems,” from “Wake Up.” Mental health and depression are not something to glorify nor is that what PUP do. Instead, they embrace the negative and provide catharsis. In PUP’s case, that’s often through black humor.

For the most part Morbid Stuff picks up where The Dream Is Over left off. Aggressive punk rock just done tighter, more thought out, darker and better. And those guitars, no matter how bleak the lyrics get, are fun and playful. PUP has always had a knack for small, memorable riffs, and Babcock and Steve Sladkowski continue that trend here, especially on the catchy first single “Kids." There are subtle musical changes like “Full Blown Meltdown,” maybe the most aggressive song they’ve released, and “Scorpion Hill,” which takes notes from The Rolling Stones without diving in completely. “City” also steers the band in a new direction, starting slowly only to end the album with a spastic breakdown.

But as always, PUP’s attention to detail is what keeps them a cut above the rest. Strong sequencing, something often overlooked, has always been a PUP staple. So are clever, morose titles like “Bloody Mary, Kate and Ashley.” There’s the above and beyond packaging: the biggest bundle offered a lifeboat! And, of course, the music videos. PUP’s viral creations have made them fodder for hip indie blogs, and singles “Kids” and “Free at Last” are no exceptions. All of these reveal multiple, exciting facets of PUP.

Morbid Stuff is punk rock at its best. PUP has delivered something that achieves the rare feat of satisfying older fans while also leveling them up career-wise. It's also, hopefully, a record a kid discovers in a record store (or more likely online) and makes him or her feel less alone. “I’ve been having some pretty dark thoughts, I like them a lot,” is a terrifying line Babcock delivers with an audible nod. It’s about the end of the world, not in a grand sense, but in a way where you feel like you’re losing a grip on life and need some sort of lifeline. This is that lifeline.

Ellen and the Degenerates: Return of the Herb