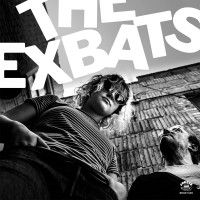 Either a debut full length following a string of singles or a compilation of the band’s best work depending on your view of things, E is 4 ExBats demonstrates the South West band bending a skewed view of the world into some classic frames. ExBats are weird and they might not realize how weird they are, which makes the album all that much more interest.

A band composed of daughter Inez on drums and vocals and pops Kenny in guitar, the band wades into some surprisingly dark territory for being a family band. Inez displays an unflinching honestly, similarly to how Morrissey or Debbie Harry might willfully display envy or greed or anger without any reservation. “Everybody loves my mom,” while hilarious, is also interesting in that Inez talks about her mom is cooler than her and gives all her friends drugs. On “Kill yr boyfriend,” Inez isn’t afraid to be nasty and instead of lamenting a broken heart, takes the broken heart out on the boyfriend of her object of affection- she’s not scared to come across as petty or envious, and instead of that making her seem unlikeable, it makes her immediately relatable. We all have ugly thoughts but so few of us admit this. Inez admits it, and in doing so, tells us what we already know about ourselves.

It doesn’t hurt that the band flips between ripping punk rock and neo-garage rock. “2027” could have been stolen from a Weirdoes or Avengers single with its charging, burning riff. Meanwhile, “Girls like these” is borne from ‘60s radio rock and could equally have been a 1910 Fruitgum Co single or an Animals tracks. For the most part, the tunes are sparse, catchy, and to the point. Both early punk and early garage rock thrived off hooks and the band unabashedly aims to make a thumb snapper of a record. And they succeed.

The real gold here, though, is the group’s shifted perspective. I’m pretty sure that “Buck Barnes” is about wanting to have sex with a comic book character. “I’m a witch” is about proudly being an agent of one’s own destiny. The kickers are both “Hercules” and “Xena!”, which of course, are pulled from weekend schlock show Hercules: the legendary journeys. The former is actually a dreadfully silly song plated in a cartoon façade- what do you do when the object of your affection is simply, out of your league. Do you travel along, behind, just to be in that person’s presence, or do cause yourself pain and leave, for your own good. How amusing is it that the band pulls deep, cosmic questions from a cut-rate “action” show, which of course, was pulled from ancient parables that were meant to answer deep cosmic questions?

The ExBats’ strongest punch is that while they’re weird and unique, somehow they’re able to tilt that perspective into a universal message. Inez and Kenny aren’t afraid to take a good, hard look at who they really are, and they’re suggesting that you ought to do the same.