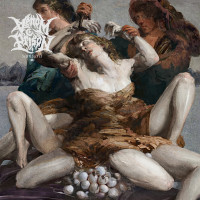 Death metal can be kind of hard to penetrate. That’s just a fact. 90% of people (and that’s being optimistic) just won’t ever be able to get on with it. The typical vocal style, lack of immediately obvious melody, the frenetic pace and nature of song structure...even I can see why it’s not for everyone. When Venom Prison came along with their debut full-length Animus in 2016, there were more nods to hardcore than the usual death metal band, which arguably made their sound a little more palatable to fans of other genres on the ‘heavy’ spectrum. On those grounds, (and the undeniable quality of the record) they found themselves being spoken about in some pretty good company - and doing shows with the likes of Dying Fetus and Goatwhore. (Trivia - The band were also supposed to be supporting Decapitated but pulled out of the tour when Decapitated were accused of rape and kidnapping charges - though these were subsequently dropped.)

But back to the matter at hand. Second album from Venom Prison. Have they leant into the hardcore further? Have they looked for a more spacious sound to bring more people in? Nope. The record is even heavier and more technical than the debut. The traces of hardcore are now few and far between - with industrial and classic heavy metal arguably playing more of a part in the tapestry of sounds that come together across this album’s 10 tracks. But don’t let that mislead you - we’re fundamentally in death metal territory here; No question. Song titles such as “Matriphagy”, “Sadistic Rituals” and “Uterine Industrialisation” give you an idea of the area we’re in and that there’s a message here, too. From the get-go, the songs are thick with riffs, shifting time signatures and tremolo-laden, squealing leads. It all comes at you so fast that the first couple of listens are akin to being rapidly pummelled in the face, but repeat listens reveals not only the deftness of construction in each of the sections - but the craft with which they’ve been stitched together to bring about this extraordinary maelstrom of brutal, swirling ideas - that still somehow feel cohesive as songs.

Vocally, Larissa provides an incredibly impressive and varied performance to the record. It’s not always easy to bring variation - and even more so - character to death metal growls and snarls, but Larissa provides both in spades, making for an even more exhilarating listen as your attention is pulled from the musicianship to the vocal and back again. There really doesn’t feel to be any weak links in Venom Prison’s chain at this point. The rhythm section, in the form of Mike Jefferies (bass) and Joe Bills (drums) anchor the record skilfully, but with such pace and technicality, making them as much a part of the overall impact as Ash Gray and Ben Thomas on guitar duties. Obviously a fair amount of this is down to the way the album has been mixed and produced - and that again is an area worth mentioning by virtue of its excellence. It doesn’t rely on the more dirty, swampy death metal production styles of old, but more on utilising modern equipment and techniques to conjure the unsettling ambience - but in a way that really brings the band’s individual performances into the spotlight and deservedly so.

I’ve spent a lot of time with this record since its release and that’s the only reason I’ve been able to unpack it in something approaching a journalistic fashion. There are genuinely intelligent and interesting nuances throughout, but in the record’s beating heart, it is a true death metal thrill ride. There are nods to the genre’s lineage, updated with a contemporary sheen that doesn’t stop it from being utterly excoriating. It’s an impressive album, but that doesn’t stop it being a fuck of a lot of fun, too.