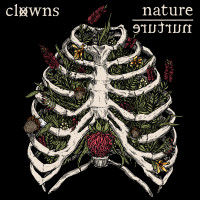 One could argue that Fat Wreck Chords has developed somewhat of a signature sound when it comes to the bands they’ve signed. I’m not exactly sure how to define that sound, but their latest band, Clowns, strays pretty far from the Fat formula on their new album, Nature/Nurture. The Australian 5-piece has gained a pretty big fan base in their native country after releasing three albums as they've continuously evolved into what seems to be an amalgamation of their first three releases. The result is a record steeped in hardcore-punk that veers often into various other genres.


“Bland is the New Black”, a track about anti-conformity, opens the record and is arguably the best song on the album. It is blistering, loud, and aggressive. Kind of what I expected after reading some of the press about the band. The next two songs maintain a similar sound, but you can feel the band beginning to swerve a little. “Soul for Sale” starts and ends slowly, and contains some screaming vocals, but shows a bit more vocal range, while “Freezin’ in the Sun” contains a slow breakdown with some eerie female vocals. And by the time you get to the fourth track, “Nature”, you realize that the band is going to start experimenting more with various other instruments to give the album more of a psychedelic, spacy feel to it. They even throw in a sitar to end the album, which provides imagery of a trippy dream sequence. There are also moments of ‘70s hard rock, ‘80s metal, and modern alternative rock. Songs like, “I Wanna Feel Again”, a reflection on mental health issues, has an alternative feel to it, while “Prey for Us” is metal-tinged with some interesting guitar progressions. Despite this, there are still moments of straight-forward hardcore punk as in “1-19”, though the song contains some different instruments.

While the focus will clearly be the music, the band prides themselves on their lyrical content. Though the words may be difficult to comprehend without a lyric sheet, it may be worth taking the time to dissect the songs to discover some of what the vocalist calls “cryptic messages”. With songs that range in topic, from S&M clubs to mental health to societal issues, it definitely makes for a more interesting listen.

It’s easy to see how Clowns caught the attention of Fat even though they are not the prototypical Fat band. The album is passionate, eclectic, aggressive, and raw. And it challenges the listener, while maintaining somewhat of a familiar sound.

Big Eyes: Streets of the Lost