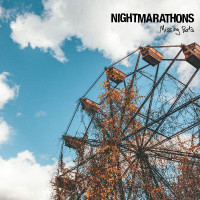 You’ve been here before. It’s a dream running through your head and a little too familiar. A bit duller this time. Moments like this come and go in people’s lives. Sometimes they stick out for the sense of deja vu, other times they fade away not conjuring enough of a connection to land. Nightmarathons’ new album Missing Parts encapsulates this.

Missing Parts starts with hi-hat and open notes before landing in the crunchy build up of power chords. It sounds pleasing and all familiar at the same time. “Waiting Room” carries through, but it’s second song “Comeback” where the album begins to reveal itself. A bit more upbeat than the opener, the song gives itself to sing alongs with the chanted “no one comes around here anymore” peppering the choruses and closing. The drum fills during the bridge really stick out underscored by the production value.

The album is easy listening with a crisp sound that highlights individual contributions from the players as needed. See the raspy bass guitar in “Warning Sign” that puts the song in Bouncing Souls’ territory. This has been talked about in various interviews from Chris #2, producer of Missing Parts, but one of the benefits of Anti-Flag’s major label days was the ability to build a top notch studio. Missing Parts is a clear benefactor of that.

Despite sounding pleasing, Missing Parts does suffer from sounding a little too familiar. The album tends to stall out a bit in the middle on some of the mid-tempo songs. It would not be wrong to describe the band in the same thread as Iron Chic, although without quite the chops. This doesn’t prevent the top lines from sticking out though. The back to back of “Honor System” and “Watered Down” on the latter half of the album are highlights along with the aforementioned “Comeback.” On “Honor System,” Nightmarathons step further out from the sound they find comfort in adding in some alternative rock influences which is a welcomed variance.

Overall, from the ferris wheel on the cover to some of the lyrics throughout, you’ve likely heard this album in some form or another. As with most punk rock in this vein, your personal connection to this album is going to drive your enjoyment to it, but the ability is here if it lands for you.

Lenny Lashley's Gang of One: All Are Welcome