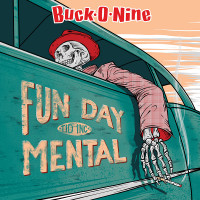 In the Mid 90's, Ska had exploded into the mainstream after bubbling to the top earlier in the decade. Bands like The Mighty Mighty Bosstones and Sublime certainly catapulted to the top, while Reel Big Fish and No Doubt also maintained a tremendous wave of success. One still can't go to a sports game without hearing the opening riff to "Impression that I Get" even today in 2019. The cool thing about that ska movement were some of the different scenes throughout. New York had its bands like the Toasters and Slackers. DC had the Pietasters. Detroit graced us with The Suicide Machines. However, for all intents and purposes, ska was a California thing, made evident by the cluster of bands that came out of the state. One of these bands just released their new album today, Buck O Nine, and their latest album in 12 years, Fundaymental.


Buck O Nine had experienced major label success in the mid 90's with their album 28 Teeth, but never got to the level of their peers. They still maintained the course, putting out Libido in 1999 and releasing Sustain on Asian Man Records. So how does a band that has hasn't put out a record in 12 years sound?

Well, the San Diego septet comes out of the gate with the bouncy high energy track "Paint the Night Red", and it sounds as they haven't missed a beat in 12 years. "Top of the World" sounds like a throwback to the 2-Tone sound, however with an annoying chorus that really takes away from the vibe of the song. "Skeletons" pick the energy back up with distorted guitar, leading horns, and a chorus full of sing alongs.


The record itself on the whole, is a good mix of what Buck O Nine is known for best, taking elements of reggae, rocksteady, rock and punk into a blend the act has pioneered since 1991. What is also impressive is that this is the same line up of the band that has been around since the beginning, so all the playing and performances are top notch. While the record can drag a little at times, there is no doubt that old fans of the band will be listening to this record, and fans of ska in general can appreciate what a veteran act is contributing to the scene. For me personally, the one fatal flaw of the record is the production. It sounds as if it was recorded at different times and places, and it was. While the members are spread across the country, they were able to record in their own spaces, and send files back and forth, to get the album to come to fruition. That works for them, and that is fine, it is just my own opinion that bands usually to their best work in the room together. At the end of the day, there aren't many bands that can maintain a consistent lineup for 28 years, let alone make a new album that sounds as inspired as the band did during their heyday. That alone is worth a listen, and I hope fans of the band will feel the same.