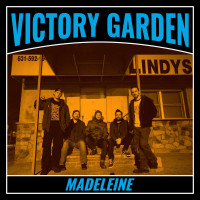 Victory Garden have a pretty impressive resume on paper. Comprised of current members of hardcore stalwarts Backtrack and members of Hangman, Capital, and Thieves and Assassins, anyone with a topical interest in hardcore would likely be intrigued to check out this project based on the players here. However, Victory Garden choose to eschew the heaviness of their other bands for a more straightforward punk record with alternative rock leanings and hardcore underpinnings.

Madeleine is the debut release for Victory Garden and sounds like a band of experienced players still trying to find their footing within this new project. The album kicks off with a bit of a ragtime intro before launching into the crunchy power chords and guitar bends of its title track. The song sounds not unlike Polar Bear Club. Throughout the six tracks on Madeleine, the band experiments with a few different sounds. Songs like “How Am I Going To Function?” and “No Luck” fall somewhere within the 90s Epitaph sound. The former comes close to Guttermouth, particularly with the nasally vocals supplied by Duncan Smith, but no sound sticks around long enough to make a lasting impression.

Album highlight “Isolation 101” is a catchy, sad bastard type song that easily is their most poppy effort on Madeleine. When the chorus kicks in, you’ll already be singing along by the second one with lyrics like, “You already know / I’m drunk and alone / It isn’t a question.” The lyrical fodders covers pretty standard fare including nostalgia, hangovers, and friendship. Closer “Formal Clothes” covers the album’s most serious topic noting the embrace of friends in formal clothes at funerals.

Overall, Madeleine is a solid start for Victory Garden. There’s not much here that pushes new musical boundaries, but all of the styles they touch on are played adeptly. It will be interesting to see where Victory Garden begin to settle on their next efforts.