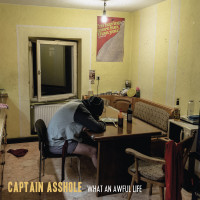 Apart from the obvious German inflection that comes through on the English lyrics, it would be difficult to consider Captain Asshole as anything other than a band from the U.S.A. A number of bands come to mind when listening to What an Awful Life and in order of relevance they would be The Copyrights, Timeshares and Captain, We’re Sinking.

Captain Asshole seems to have perfected the high energy, melodic pop-punk of The Copyrights whilst adding in the twists, turns and changes of pace that I hear when listening to the latter two bands. It’s an infectious blend and from the moment the opener “Kyoto Wa Doko Nan Da” bursts into life it’s evident that this trio means business and easily has the ability to get the job done.

“Sunday Morning” is the track I’d probably most compare to Timeshares in that it has one of those musical moments that you look forward to in songs, be it a particular lyric, a change in drum beat, or chord progression that I found in many of their songs. In this case, it’s a just a few gentle hits of a cymbal – nothing big or fancy, but something that sticks out when I listen to the track. (If the Timeshares guys are reading this, I’d love to hear you do a cover of this track.)

To keep the American theme going, “No More Spanish Love Songs” features Cory Call of Arliss Nancy although this is a different beast to what that band does. This is followed by my favorite track “I Literally Have No Idea What The Fuck I’m Doing”, a song which should be sung by the majority of the Members of Parliament here in the U.K. as we crawl towards Brexit, a situation which matches the appointment of Trump as President of the U.S.A. in its sheer stupidity.

There are many bands which have been treading the pop-punk path longer than Captain Asshole, but these Germans have done a damn fine job with their debut album and they are speeding along, closing the gap on some of those more established bands.