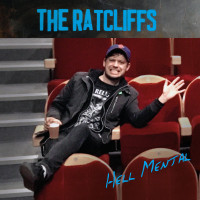 This album makes me nostalgic about being nostalgic. Hell Mental by The Ratcliffs is a throwback to so many of those Ramones loving bands of the early/mid ‘90s when I first started listening to punk rock. For no particular reason, I moved away from that sound in my later years, but I’ve been happy to dive back into records like this from the Austrian trio.

While the album has a familiar sound in regards to the Ramones universe, the band still keeps you guessing a bit. The booming back beat and rapid high hat is still there. You still hear those half-step guitar slides as fills. There’s loads of ‘50s harmonies throughout as well. And the song structures and lyrical content are pretty straight forward. But just when you think you have it figured it, the band takes a slight left turn, which makes the album sound a whole lot tighter. For example, see if you can guess the opening progression of “Sidewalk Weirdo” on your first listen.

In general, all of these songs are super fun. It’s hard not to be happy after listening this album. It makes me smile every time I hear frontman Paul Coyote sing “scream and shout all the time, that’s what he likes to do. Being a bum, it ain’t a crime, sidewalk weirdo”, partially because he rhymes do with weirdo. Silly, but awesome. And with a nod to “The KKK Took My Baby Away”, the fourth track “Just Because” gives me a similar feeling when he sings “it’s just because, just because of you, you’re the one that I like.” Simple, yet somehow profound. And this is just scratching the surface. There are numerous other highlights on this album in regards to both the lyrics and the melodies.

I love albums like this. On the surface, Hell Mental is great on the first listen, but the hooks force you to come back for more. And despite a presumed language barrier, the lyrics are fun to explore as well even though some may consider them slightly juvenile. But, I think that’s what makes it all fun. Simple, yet complicated. Kind of like life I guess.

Captain Asshole: What An Awful Life